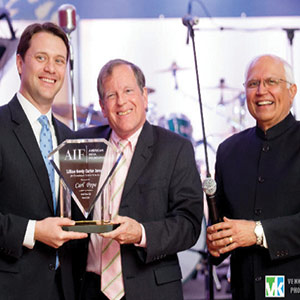 Although the late Harry G. Barnes, Jr., former Ambassador to India (1981-85) did not live quite long enough to see his idea carried to fruition, he would be pleased that the award that he proposed, in the name of Lillian Carter, President Jimmy Carter’s mother and an ardent fan of India, has now been given. The award honors Lillian Carter’s legacy of medical and nursing excellence to the underprivileged, both in India, as a member of the US Peace Corps in the late 1960s, and to African-American communities in Georgia during the Civil Rights movement.

The inaugural Lillian Gordy Carter Award for Exceptional Service to India was presented on March 27, 2015 to veteran leader of the environmental movement, progressive social activist, and celebrated author Carl Pope, former chairman and executive director of the Sierra Club, who served as a Peace Corps volunteer in India (as did Mrs. Carter), wrote a book about his experiences there (as did she), has been a supporter of the environmental efforts of former New York Mayor Michael Bloomberg for India to recognize the public health costs of continuing to rely primarily on coal for its electricity, and currently serves on the U.S. Advisory Council of the American India Foundation (AIF) among other boards of environmental and labor organizations.

AIF has just opened its Atlanta office, and the award was presented at its celebratory gala by none other than Jimmy Carter’s grandson, State Senator Jason Carter. Atlanta’s Viren Mayani was instrumental both in co-hosting the gala and in seeking the blessings of President Carter to allow AIF to issue the award in the name of his late mother.

Sen. Carter also served overseas in the Peace Corps. “This occasion and the award is incredibly important to us,” he said. “At the age of 68 for my great grandmother to go into the Peace Corps and her experience in India has infected the entire family. Our family’s commitment to social change can be traced back to President Carter’s mother’s experience In India. It is an honor for us to be a part of this organization. Her journey is also a testament what one person can do. She has been the change that Gandhiji said we should be.”