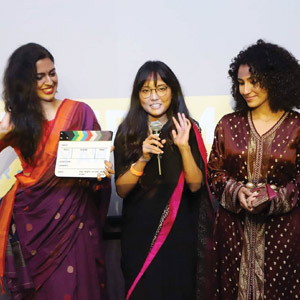 Purnaviram, a short film written, produced, directed, and shot by Sharon Gurung from Agnes Scott College, is one of four films to have won the Jury Award at the college’s Campus Movie Fest 2019. The film will now compete at the national level at CMF Terminus in Los Angeles in 2020. The Jury Award also qualifies Purnaviram for an invitation to the Cannes International Film Festival.

Purnaviram seeks to raise awareness about the regressive practice of ​chhaupadi in Nepal, where menstruating girls and women are confined to tiny, cold, unsafe huts during their monthly cycle.

Sharon is a Political Science student at Agnes Scott, pursuing a dual degree in Environmental Engineering. The film’s lead actor, Anoushka Pant, is majoring in Business Management and Dance at Agnes Scott. Anoushka and Sharon (left and middle in the photo) are Hubert Scholars, a program instituted by the college to encourage students aspiring towards public service and to fund their internships.

More on chaupadi from the writer:
Chhaupadi is a tradition in the West of Nepal in which women are forbidden to enter their houses and are banished into tiny cold huts called Chhau Goth outside their compounds. They are supposed to stay there until the end of their period. The huts lack proper sanitary items, nutritious food, bedding, and most importantly safety. Many women die every year, due to snake bites or suffocation, and many become the target for sexual predators. I will never be able to understand what exactly it feels like to live in a Chhau Goth. But the feeling of being an outcast during menstruation is something I and almost every Nepali woman experience. Living in Kathmandu, it is easy for us to talk about the villages in the West of Nepal and how Chhaupadi is evil and atrocious. Despite that, we don’t ever stop to think about how we are contributing to the perpetuation of this very tradition that we loathe. We use the word Nacchuni (Untouchable) synonymously to say that someone is menstruating. In Kathmandu, girls are kept in dark rooms with no sunlight and barred from going out for twelve days when they get their periods for the first time. We worship our women as goddesses, but every month for a week they turn into outcasts who are forced to believe that they have committed a sinful act of menstruation. This is not as extreme as banishing women outside our houses into tiny huts but how will we ever be able to eradicate Chhaupadi if we don’t start by changing our outlook on menstruation first? How can we expect people to end Chhaupadi if we continue to call our daughters untouchable? Yes, Chhaupadi is a crime, but it’s about time that we realize that we are all responsible for its perpetuation. Even if the huts are destroyed and people imprisoned for practicing it, it will continue to exist as long as we make our women feel ​that something so natural ​as menstruation is wrong and that they’re untouchable or impure for having to go through it. We made this movie as an effort to create awareness about Chhaupadi. It is titled “Purnaviram” (Full Stop.) because that is what we need, a full stop to this tradition and the period taboos that exist in our society which has oppressed women for centuries taking away the agencies of their own body.

The research:
Purnaviram is based on her research of marginalized women in Nepal and the cultural traditions that oppress and restrict them. Under the aegis of Action Works, a Kathmandu-based NGO, she travelled to several districts as part of their “Elimination of Chhaupadi” project to gather data, analyse the practice, its effect on women and girls’ health and education, and to make recommendations to local government bodies. She has interviewed 107 women in Jumla, Nepal, to understand the effectiveness of laws related to women’s rights and also conducted classes on menstrual hygiene.

Cast and Crew:
We all are students at different universities. The majority of us are from Agnes Scott College, and then some actors are from Ga Tech and Ga State University, and our music is from a friend who goes to Michigan State University.

Campus Movie Fest, said to be the world’s largest student movie festival, was founded in 2001 by four students from Emory University. Today, CMG provides aspiring student film-makers all the equipment needed to make a five-minute film in one week—for free.