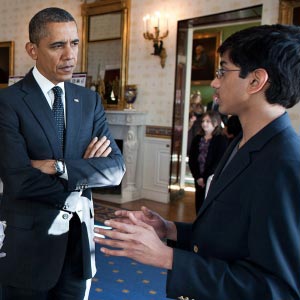 For Anand Srinivasan, a 10th-grader at Roswell High School, this year was special, as he was named a finalist in the worldwide Google Science Fair and was invited to the 2012 White House Science Fair, where he got to explain his project to President Obama.

After reading an article about a climber who lost an arm, Anand decided to build a prosthetic arm powered by thought. Electrical signals from the brain show patterns corresponding to motor movements. “My project involves the creation of a signal-processing software program that can more accurately filter and classify those electrical signals and detect specific patterns,” he said. “These patterns then could be mapped to the functions of a robotic arm.” He derived an equation for a filter to remove noise from other body activity and have fewer involuntary movements. “Just to get the theory to facilitate the experiment, I had to take online courses from universities,” Anand added. “I gained a lot of skills that will help me succeed in future science fairs.”

Next? "I am doing a lower-limb robotic self-balancing exoskeleton. It is like wearable robotic legs, not just for people who have lost legs but also for those who have legs but can’t walk for some reason."

He says, "Science is the art of asking questions. If you are curious about a certain subject, pursue that subject and soon you will find yourself in a field that you didn’t think was science but really is. It is about curiosity, passion and a love of learning. All of us have that."

Links:
Marshmallows and serious science at the White House
http://www.mnn.com/green-tech/research-innovations/stories/marshmallows-and-serious-science-at-the-white-house


Submitting your news item for consideration in Newsmakers
Please send news items for consideration in the Newsmakers section to Newsmakers@khabar.com.
Publication of news is based on several criteria, including the volume of reports submitted for a given issue.  We are focusing on local community members with some achievement or award that will be interesting and/or inspiring to our readers.