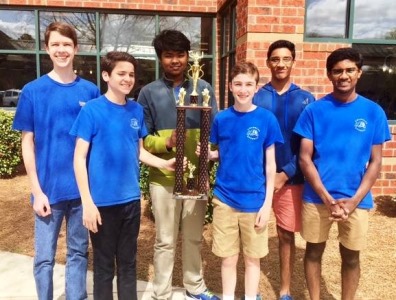 2. Chattahoochee High School’s Economics Bowl team won the State Grand Championship at the Federal Reserve Bank in Atlanta on March 20. The Hooch team defeated the Gwinnett School of Mathematics, Science, and Technology in the semifinals and then defeated Marist in the finals to take the first place trophy. Congratulations to students Kalen Patton, Tej Guttikonda, Michael Sawchuk, and Abhinav Kumar who were on the winning team. (Guys, please contact Khabar if you have a better photo of you!).

3. DeKalb County School District had an outstanding showing at the 2017 Georgia Educational Technology Fair on March 11, 2017 in Macon. Students took home 13 awards. Anish Kumar of Chamblee Charter High School was one of the Third Place winners for his work in the category of Project Programming.

4. Parkview High School senior Tanish Pradhan was announced on April 6 as the recipient of the Georgia United Credit Union’s Vernon E. Carne Scholarship which comes with a $10,000 grand prize. Graduating with a 4.0 GPA, Pradhan is a member of various academic and community service organizations including Technology Student Association, Math and Science National Honor Societies, Sociedad Honoraria Hispanica, and Beta Club. He is the President of the Parkview National Honor Society. Pradhan plans to attend the Georgia Institute of Technology and major in Biomedical Engineering.

6. Manav Mathews, a senior at Chamblee Charter High School is DeKalb County’s 2017 STAR student, recipient of the Alonzo McDonald Scholarship, one of 10 STAR co-winners for Region 3A, and advanced to State Level finalist. The 10 Region winners all scored a perfect 1600 on their SATs. Mathews has been accepted by the University of Georgia as a Foundation Fellow and has won many honors as well as being captain of the varsity tennis team. Manav’s teacher, Uwe Neuhaus, praises him for his general knowledge, broad interest, and unusual maturity, his sense of humor and positive outlook, and his near-native speaker proficiency in German. Mathews represents the absolute best of the school, says its principal. “He leads by example with grace and humility. He is amongst the kindest and most service-oriented students I have ever encountered….He worked with classmates over the last two school years, during unspeakable tragedy at our school, to create a new student organization to provide joy, happiness, encouragement, and positive reinforcement to as many students as possible. He not only sets the bar high in the classroom, but he also demonstrates the highest and most admirable character traits.”

Science:
In March 2017, the team won its seventh consecutive state title, and in February 2016, its seventh consecutive region title. In January 2017, we won the Brookwood Invitational Science Olympiad Tournament (BISOT) for the seventh time. Brookwood is the only school to have ever won the invitational, the state's largest high school Science Olympiad event. Every team member collected at least one medal to contribute to our total of 17 medals in 23 events. Every medal was needed to hold off a very talented and determined Chattahoochee team that won 16 medals.
2017 State winners:
https://1.cdn.edl.io/uZuenrPHuWdRTwD7FgAoJYpI5ZAaJl7I2abd59pha7joP8Y5.pdf
2017 BISOT winners:
https://1.cdn.edl.io/p9yNH1LIBJ9AVTs7aOVShKA7k2gxn7XrXl8uH94fmaczZSdv.pdf