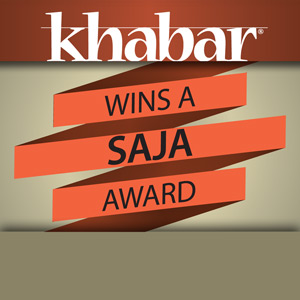 It is not everyday that a regional community magazine like Khabar beats contenders such as Time magazine and U.K.-based Granta to win an award for one of its articles. That is precisely what happened at the annual SAJA Awards held on Saturday, July 14 at the National Press Club in Washington, DC.

SAJA, the South Asian Journalists Association, is the leading organization of its kind, serving thousands of journalists worldwide. This year the SAJA Awards and Dinner Gala was attended by over 200 journalists representing organizations such as CNN, Bloomberg, MSNBC, PBS, Frontline, The Huffington Post and many more. Keynote speaker Ali Velshi, CNN’s chief business correspondent, gave a rousing speech about the danger of conformity that afflicts the industry.

An editorial titled, “When Parochialisms Collide,” by Parthiv N. Parekh, appearing in the December 2011 issue of Khabar, won in the category of “Outstanding editorial/commentary on South Asia, or the worldwide South Asian diaspora: All media.” The other two finalists in the category were: “China’s Century – or India’s?” by Zoher Abdoolcarim, Michael Schuman and Bill Powell, Time; and “The Politics of Grief,” by V.V. Ganeshananthan, Granta.

The report from SAJA lists winners and finalists, with links to the articles:
http://www.saja.org/news?mode=PostView&bmi=1010063