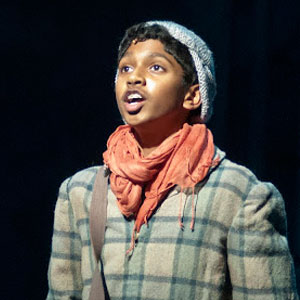 Fourteen-year-old Ruben Roy performed with joy and confidence in the lead role of Charlie Bucket in the Atlanta Opera’s debut of The Golden Ticket, a comic opera, a poignant tale about wishes coming true based on Roald Dahl’s children’s novel, Charlie and the Chocolate Factory. Ruben has been singing for almost half of his life, from opera (as Amahl in Menotti’s Amahl and the Night Visitors, and as a street boy in Bizet’s Carmen, both with the Georgia State University Opera Department) to classical music (as a soloist in Gabriel Faure’s Requiem).

He is a founding member of The Georgia Boy Choir, where he began singing when he was only 9 years old. He has performed in Vienna, London, St. Petersburg, Beijing, and in various locations throughout England, China, Austria, the Czech Republic, Russia, Ukraine, and of course, the United States.

Ruben is an eighth-grader at The Heiskell School, where he not only excels academically and musically, but is also a valued member of the school’s basketball, cross-country, and track and field teams. Science is his favorite subject. He plays both piano and guitar.

For three consecutive years, Ruben has been esteemed and elected by his fellow choristers in The Georgia Boy Choir to receive its highest award, the Tradition Award, presented to the boy who most embodies all of the qualities inherent in a good chorister: Leadership, Excellence, and Character.