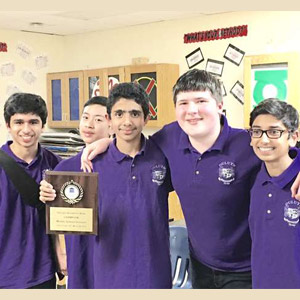 Duluth Middle School’s Academic Team participated in the NAQT Middle School National Championship Tournament in Atlanta, finishing with a 4-4 record after a tough slate of matches. Three of the four losses were by a deficit of one question. As a team, Duluth Middle gained bonus points 20% of the time for answering so quickly.

Following that tournament, the team participated in the U.S. Academic Bee & Bowl National Tournament in Arlington, VA. After surviving more tough matches the team made it to quarterfinals, losing to the eventual 2nd place team.

Overall it was an exciting year as the team finished ranked 8th in the nation.