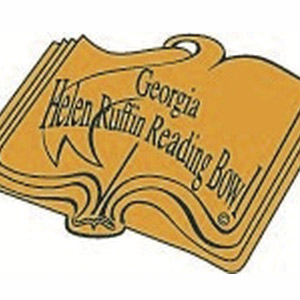 We’re familiar with spelling bees, geography bees, and general knowledge competitions like Who Wants to Be a Millionaire, but did you know that Georgia has a reading competition? Gowtham Magesh, a student at Crabapple Middle School, and Urvi Iyer and Aditya Sayal of Cambridge High School were on their school teams that recently had multiple wins in the Helen Ruffin Reading Bowl competition. Both teams took first place at the county level (where more than 50 teams participated), second place at the metro district level, and fourth place at the regional level.

The concept of the reading bowl was devised by Helen Ruffin, a dynamic library media specialist in DeKalb County in 1986, to introduce children to books of literary excellence, specifically the 20 Georgia Children’s Book Award Nominees each year. For students in grades four through twelve, it has become a statewide reading motivator, with over 600 schools now participating. 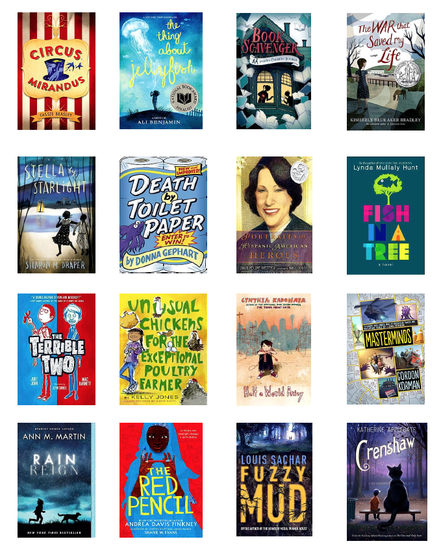 The Thing about Jellyfish. Benjamin, Ali. (2015)
Twelve-year-old Suzy Swanson wades through her intense grief over the loss of her best friend by investigating the rare jellyfish she is convinced was responsible for her friend’s death.

The Book Scavenger. Bertman, Jennifer Chambliss. (2015)
Just after twelve-year-old Emily and her family move to San Francisco, she teams up with new friend James to follow clues in an odd book they find, hoping to figure out its secrets before the men who attacked Emily’s hero, publisher Garrison Griswold, solve the mystery or come after the friends.

The War that Saved My Life. Bradley, Kimberly Brubaker. (2015)
A young disabled girl and her brother are evacuated from London to the English countryside during World War II, where they find life to be much sweeter away from their abusive mother.

Stella by Starlight. Draper, Sharon. (2015)
When a burning cross set by the Klan causes panic and fear in 1932 Bumblebee, North Carolina, fifth-grader Stella must face prejudice and find the strength to demand change in her segregated town.

Death by Toilet Paper. Gephart, Donna. (2014)
Contest-crazed twelve-year-old Ben uses his wits and way with words in hopes of winning a prize that will keep his family from being evicted until his mother can pass her final CPA examination.

Portraits of Hispanic American Heroes. Herrera, Juan Felipe. (2014)
Showcases twenty Hispanic and Latino American men and women who have made outstanding contributions to the arts, politics, science, humanitarianism, and athletics.

Fish in a Tree. Hunt, Lynda Mullaly. (2015)
Ally has dyslexia, and can no more read like everyone else than a fish can climb a tree. Tired of being called slow and a loser, Ally finds that in her latest new school her teacher understands her limitations and actually sees in her a creative, intelligent side. New friends with their own learning disabilities help Ally see that she can achieve success and find happiness.

Roller Girl. Jamieson, Victoria. (2015)
A graphic novel adventure about a girl who discovers roller derby right as she and her best friend are growing apart.

The Terrible Two. John, Jory & Barnett, Mac. (2015)
When master prankster Miles Murphy moves to sleepy Yawnee Valley, he challenges the local, mystery prankster in an epic battle of tricks but soon the two join forces to pull off the biggest prank ever seen.

Unusual Chickens for the Exceptional Poultry Farmer. Jones, Kelly. (2015)
Through a series of letters, Sophie Brown, age twelve, tells of her family’s move to her Great Uncle Jim’s farm, where she begins taking care of some unusual chickens with help from neighbors and friends.

Half a World Away. Kadohata, Cynthia. (2014)
Twelve-year-old Jaden, an emotionally damaged adopted boy fascinated by electricity, feels a connection to a small, weak toddler with special needs in Kazakhstan, where Jaden’s family is trying to adopt a “normal” baby.”

Masterminds. Korman, Gordon. (2015)
“A group of kids discovers they were cloned from the DNA of some of the greatest criminal masterminds in history for a sociological experiment.”

Rain Reign. Martin, Ann M. (2014)
Struggling with Asperger’s syndrome, Rose shares a bond with her beloved dog, but the dog goes missing during a storm, Rose is forced to confront the limits of her comfort levels, even if it means leaving her routines in order to search for her pet.

The Red Pencil. Pinkney, Andrea Davis. (2014)
“After her tribal village is attacked by militants, Amira, a young Sudanese girl, must flee to safety at a refugee camp, where she finds hope and the chance to pursue an education in the form of a single red pencil and the friendship and encouragement of a wise elder.

Fuzzy Mud. Sachar, Louis. (2015)
Two middle-grade kids take a shortcut home from school and discover what looks like fuzzy mud but is actually a substance with the potential to wreak havoc on the entire world.

Crenshaw. Applegate, Katherine. (2015)
A story about a homeless boy and his imaginary friend that proves in unexpected ways that friends matter, whether real or imaginary.

Appleblossom the Possum. Sloan, Holly Goldberg. (2015)
A young possum strikes out on her own and winds up trapped in a human house before her brothers can rescue her.