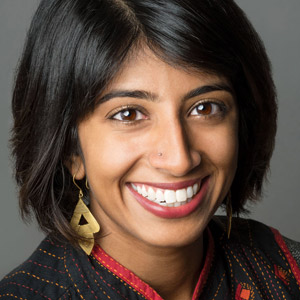 This year, 1,775 applicants tried for the Paul & Daisy Soros Fellowship for New Americans, which awards up to $90,000 per fellow for graduate school study. Of the 30 fellowships awarded to young (30 years old or younger) immigrants and children of immigrants, nine have South Asian heritage, one being Sanjena Anshu Sathian of Georgia.

Recipients are chosen for their potential to make significant contributions to US society, culture, or their academic fields. Past recipients include US Surgeon General Vivek Murthy, pharmaceutical CEO Vivek Ramaswamy, American Civil Liberties Union attorney Nusrat Choudhury, and nearly 600 other New American leaders.

"At a time when the national conversation seems to be on what immigrants are taking away, we are putting the spotlight on what immigrants from diverse backgrounds contribute to the United States,” said Craig Harwood, who directs the Fellowship program.

Sanjena earned a BA in English from Yale, where she was editor-in-chief of the Globalist magazine. She received grants to report from three continents, writing about Chilean miners, Nepali Gurkha soldiers, and the conflict in Cyprus. She was awarded highest honors for each of her two senior theses.

After school, she worked as a health reporter for the Boston Globe before joining the media start-up OZY. There, she wrote widely, covering the mobile home economy, ethical implications of artificial intelligence, and Asian American retirement communities. In 2015 she moved to India, where she investigated Hindu nationalism, cattle-smuggling rings on the Bangladesh border, the impact of automation on handloom industries, and a street drug in Mumbai.

Sanjena will study at the Iowa Writers’ Workshop towards an MFA in creative writing. Her work engages Hindu and Buddhist philosophy, technology, diaspora, and gender. She was a national policy debate champion and still speaks at a Gilmore Girls pace.

Links: Previous Khabar articles on Georgians who have received the Soros Fellowship:

For more information on the Fellowships, see pdsoros.org.