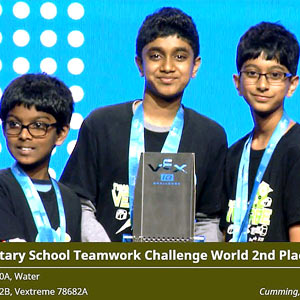 Fifth graders Pranav Bhagam, Ayush Tailang, and Ashrai Gandikota (all from Daves Creek Elementary School in Cumming, GA) won second place in the Vex IQ World’s Robotics Competition. Held in Kentucky last month, it brought together the top 400 teams from over 40 nations. There were five divisions with 80 teams in each division. Team Vextreme bagged the Teamwork Champion award in the Hubble Division. In their final match, Team Vextreme joined forces with a team from China (see photo at bottom), allowing them to move up to the finals. In this competition, students design, build, and program robots. Earlier this year, when Team Vextreme competed in the Georgia State Championship, it won two awards including the STEM Research Project award. 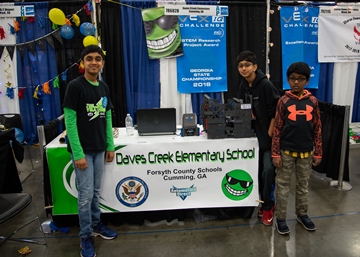 At the Georgia State Championship, Team Vextreme won two awards:
 The STEM Research Project Award. This award tests the team’s skills of research about the real world’s issues, and asks the team to design a solution to one of the world’s issues. The team is also required to research their topic online using trustworthy sources, and be able to present the project on the day of the competition.

 Teamwork Challenge 2nd Place. The Teamwork Challenge is a challenge presented to Vex IQ Participants. In this challenge, teams work with other teams (known as alliances) to maximize their score. Both teams will score the same points each match. Teams with top rankings at the end of the matches will move up to the finals. The highest score in the finals win. Team
Vextreme had the 2nd highest score, allowing them to win Teamwork 2nd Place.
These two awards qualified Team Vextreme for the 2018 Vex IQ Challenge World Championship.​

Links:
Three US teams attended the event, but this team is the only US team to have placed in the World Finals.

"Yes, the kids are creating a robot, but it's a lot more than that. They are learning excellent collaboration skills, communication skills," says Colleen Woodman, Robotics Coach at Dave’s Creek.

This is a rookie robotics team, so they have never competed on a scale like this.
Pranav Bhagam, a 5th-grade member of the team, says, "We went there just to have fun and just see the experience. No one ever imagined of winning the division and making it to the world finals and even placing second there."

They worked with a team from China in that final challenge. Language barriers made it difficult.
"We had a little harder time than we had with the US teams communicating. But all manage to get through it because we all speak the language of robotics," Bhagam says.

VIDEO included in this link:
http://www.cbs46.com/story/38163768/elementary-kids-compete-in-worlds-robotics-competition-robotics

Congressman Woodall came to the school on May 14 to congratulate the team. The Governor's office also acknowledged the key win and made arrangements for the team to meet the Governor. The kids ​are excited to share this news with the community. 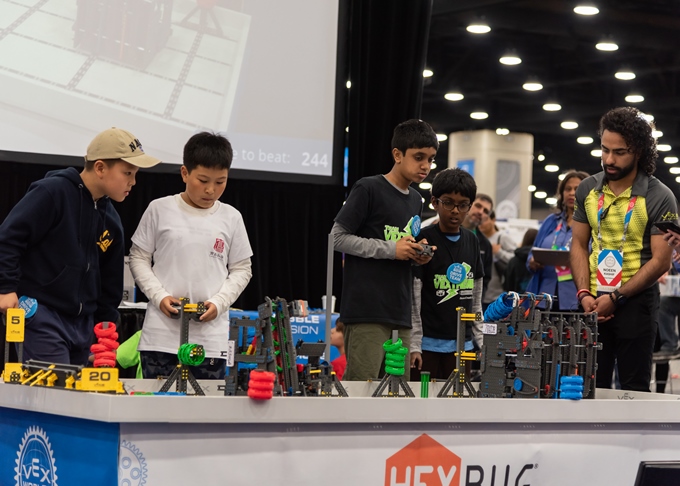