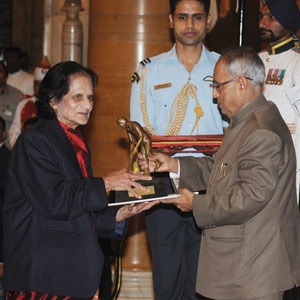 India's highest award for lifetime achievement in sports and games is the Dhyan Chand, initiated in 2002. Among the latest four recipients is Mary D'Souza (Sequeira), 81 years old and now in the metro Atlanta area, who was nominated under the category of Athletics. She gained fame as a trailblazer for Indian women in sports when she went to the Olympics in Helsinki (1952) with three other Indian women, the first Indian contingent—one of the first women in the world to go to the Olympics. She was also India's first female "double international," having gone to both the Olympics (track) and the World Cup (field hockey).

In Helsinki she got to know the famous sprinter Jesse Owens. The US men's relay team gave starting blocks to the Indian team, and Mary used hers for years. Her daughter Marissa is also an athlete and used the same block.

Mary's beginning in competitive sport came when her cousin, Maxi Vaz, a well-known hockey player, encouraged her to enter a sports meet, where she came in second in her first race. She went on to break track records at the national games and in the Asian Games.

Mary's sporting career was mainly in both hockey and track, though she also played basketball, and badminton and table tennis for the Railways. She had already won a silver medal (4x100m relay) and bronze medal (200m) at the Asian Games in New Delhi (1951). After the Helsinki Olympics, she represented India at the World Cup Hockey in London (1953), won gold (4x100m relay) at the Asian Games in Manila (1954), and played for India in the World Cup Hockey in Australia (1956). She also captained the Railway hockey team at the nationals for three years (1965- 67).

The Melbourne Olympics (1956) would also have seen her compete, too, but for lack of funds. In fact, she had been able to attend the Helsinki Olympics only because friends threw a fundraising dance for her—she had no trainer, and the government paid only airfare. In those days, athletes had no corporate sponsors and were not supported by the government, so for most it was difficult. Mary raised her children by herself and struggled through the years. She would like her story to be an inspiration to others to never give up.

National Sports Awards are given every year to recognize and reward excellence in sports. Apart from a medal and a citation, the Rajiv Gandhi Khel Ratna Awardee received a cash prize of Rs.7.5 lakh. Arjuna, Dronacharya and Dhyan Chand Awardees received statuettes, citations and cash prize of Rs.5 lakh each. Recipients of Rashtriya Khel Protsahan Puruskar were given Trophies.

Ms. P.V. Sindhu, Badminton, a winner of Arjuna Award 2013 was not present at the award ceremony.