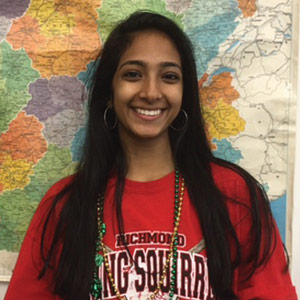 Woodward Academy senior Krithika Nayudu was recently presented with the 2017 Outstanding Senior in French Award from the American Association of Teachers of French (AATF). Krithika, in her French 5 class, received a 5 on the AP French exam last year. She also has competed in the National French Contest, is a member of the French Club and the French National Honor Society, participated in National French Week, traveled to France and Switzerland in 2016, and hosted a French student.

This award is made annually to a graduating senior, a non-native speaker of French with at least three years of French study and who has demonstrated excellence in the study of French as well as exceptional commitment to the French language and the many cultures where it is spoken.

Woodward Academy is an college-preparatory school in its second century of fostering excellence, character, and opportunity. Enrolling 2,700 students in grades PreK-12 from 23 counties, it is the largest independent school in the continental U.S.