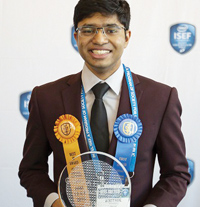 Krithik Ramesh, a 16-year-old from Colorado, won the top prize in the 2019 Intel International Science and Engineering Fair (ISEF). He was awarded $75,000 for developing an AI-enabled hi-tech system that can assist in spinal surgery. While similar devices are in use, Krithik’s idea of using virtual reality, with the help of a visor-like headset, may bring greater efficiency and accuracy to the surgical procedure.

The right word was EIGHT in the 2019 National Spelling Bee, which had two girls— Shruthika Padhy and Erin Howard—among the eight co-champions. The organizers ran out of words, literally, for this unprecedented contest. The other winners were Rishik Gandhasri, Saketh Sundar, Sohum Sukhatankar, Abhijay Kodali, Christopher Serrao, and Rohan Raja. Each of them gets a trophy and $50,000 in prize money.

Another 2019 ISEF winner was 15-year-old Shriya Reddy from Michigan. She received the newly instituted Craig Barrett Award for Innovation, worth $10,000, for devising a noninvasive method to detect melanoma lesions. Her test involves a contrast agent that uses antibodies to make a distinction between healthy and cancerous cells. Besides taking less time than a traditional biopsy, this procedure is cheaper.

There’s no stopping Virat Kohli, the Indian cricket captain who is emerging as one of the best players the country has produced. His latest achievement: During the recent World Cup match against Pakistan, which India won, Kohli became the fastest batsman to reach 11,000 runs in one-day international matches. It took him 222 innings and a little over a decade to become only the third Indian to reach this milestone.

Dr. Harmit Malik, one of the 100 new members elected to the National Academy of Sciences, is an evolutionary biologist at the Fred Hutchinson Cancer Research Center in Seattle. He studies genetic conflict by probing the arms race between viruses and their hosts, both between species and within individual organisms of a species. His work holds much promise for developing new drugs to treat diseases likes AIDS.

Who was the highest-compensated Indian-American CEO in 2018? According to a New York Times/Equilar analysis it was Nikesh Arora. As the head of Palo Alto Networks, he raked in an astonishing $125 million and was ranked third among 200 CEOs. Elon Musk of Tesla was the top-paid CEO in a list that also included Satya Nadella, Ajay Banga, Bob Patel, Shantanu Narayen, and Vivek Shah.

Meanwhile, three Indian-American women were picked by Forbes for its 2019 list of “America’s 80 Richest Self-Made Women.” Jayshree Ullal, ranked 18, is the CEO of Arista Networks, which generated 2.2 billion in revenue last year. Neerja Sethi, who founded Syntel with her husband, appears not far behind at number 24. And listed at number 60 is Neha Narkhede, the cofounder and chief technology officer of Confluent.

Health care fraud is not new, and another Indian-American—Dr. Krishna Balarama Parchuri—has been drawn to it. One of three Oklahoma physicians indicted for accepting bribes and kickbacks, he has also been charged with obstructing a criminal investigation. Meanwhile, Dr. Samirkumar Shah has been convicted of insurance fraud totaling over $13 million. He could face up to a decade in prison and/or a $250,000 fine. 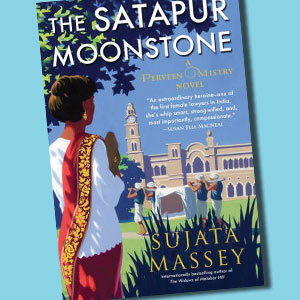 The Satapur Moonstone (Soho Press) – by Sujata Massey. For fans of mystery stories, here’s a Mistry novel for a lazy summer weekend. Perveen Mistry, Bombay’s only female lawyer in the 1920s, first appeared in The Widows of Malabar Hill, Massey’s well-received novel from last year. This time, Mistry’s sleuthing skills are needed in the wilder, secretive kingdom of Satapur nestled in the Sahyadri mountains. The maharaja died unexpectedly, as did his teenage son in an accident, and Parveen has been brought in to check on the well-being and education of the younger royal children. Strict purdah is observed, making it hard for Perveen to communicate with the two maharanis. And as the body count rises, so does the intrigue. When the colonial administrators turn to Mistry for help, she’s at first reluctant to leave the comforts of Bombay. “The hell if she’d be the one to work for Britain, which had kept India under its elephant feet since the 1600s,” Massey writes. “But she had to be diplomatic.” 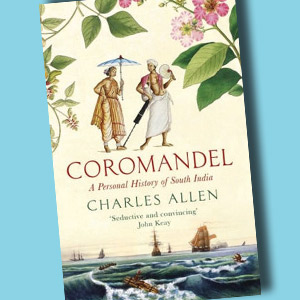 Coromandel: A Personal History of South India (Little, Brown) – by Charles Allen. For his latest work, first published in the U.K. and now available here in paperback, historian Allen takes the reader on a tour of the subcontinent’s pre-Aryan Dravidian South. Southern India was long separated from the North by the Narmada River and the formidable Vindhya Mountains, making the region less accessible to migrants and invaders. Consequently, its ancient history is less widely known. Language was another major barrier— and today, while the Indo-Aryan family accounts for 74 percent of Indians, the figure is 24 percent for the Dravidian family. “These two Indias may form a political whole, but in cultural terms they are chalk and cheese, old and new, volcanic and alluvial, shakti and shiva, rice and wheat, todi and soma, dosa and chapatti, water buffalo and cow, Dravida and Arya,” Allen notes. A child of India, though of British origin, Allen has been writing about the subcontinent for four decades and is perhaps best known for Plain Tales from the Raj. 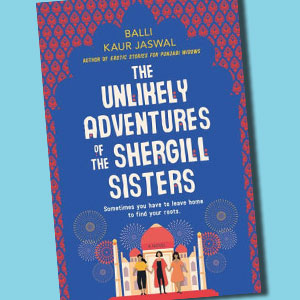 The Unlikely Adventures of the Shergill Sisters (HarperCollins) – by Balli Kaur Jaswal. Three Sikh sisters, all raised in the U.K., set off on a trip to India with their mother’s ashes for the last rites. Amritsar’s Golden Temple may be their destination, but what matters here is the journey and how the sisters’ lives—and stories—intersect. Rajni, a school principal, has returned reluctantly because she didn’t want to break a promise to their late mother. Jezmeen’s acting career is on the rocks, and the trip becomes a new beginning for her. Shirina, coming from Melbourne, has to decide how she can change her constricting marriage. Jaswal has pointed out that she “wanted to explore the tensions between tradition and modernity in immigrant communities, and particularly how those tensions play out among women like these sisters, who are the first generation to be raised outside of India.”

Also, Natasha Deen’s In the Key of Nira Ghani (Running Press Kids) is a YA novel centering on a Guyanese Indian girl. 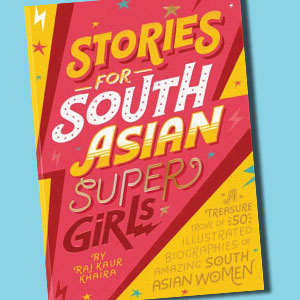 Stories for South Asian Supergirls (Kashi House) – by Raj Kaur Khaira. This book for the younger set (5 to 12 years) features fifty women of South Asian origin who are inspirational role models: among them are Indra Nooyi, Mindy Kaling, and Meera Syal, as well as Noor Inayat Khan, a fearless British Indian spy who was executed for helping the Allies during World War II. Presented as stories to motivate girls of color, the book also has drawings by ten artists. All proceeds will benefit the Pink Ladoo Project, a feminist initiative that—like the author and the publishing house—is based in London. Gender discrimination, which Khaira observed in her own family, led her to establish Pink Ladoo—and, yes, there was a reason for picking that name. She wanted South Asian families to appreciate and cherish female babies by distributing pink ladoos on their arrival.

For even younger kids (4 to 8 years), we have Meenal Patel’s richly illustrated Priya Dreams of Marigolds & Masala (Beaver’s Pond Press).