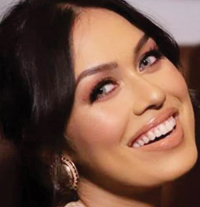 With an IQ of 146 and two degrees (one in medical sciences, the other in medicine and surgery), Bhasha Mukherjee, 23, is a certified genius. She’s also a certified beauty queen, having won the 2019 Miss England title. The junior doctor from Derby started her hospital job the day after she won the pageant. Following Miss Panama and Miss Australia, she becomes the third Indian-born contestant to win a national title this year.

Sushma Swaraj, India’s former external affairs minister, was well liked by many in the diaspora for her accessibility, affability, and ability to get things done promptly. A BJP stalwart, she had been active in Indian politics since the 1970s. Following a cardiac arrest, Swaraj died at the age of 67. Elected seven times to the Indian parliament and three times to a legislative assembly, she had also served as Delhi’s first female chief minister.

Sand artist Sudarsan Pattnaik of Odisha has been winning accolades for years. His latest sculpture won a People’s Choice Award at an international festival in Massachusetts. “Stop Plastic Pollution, Save Our Ocean” shows a turtle trapped in a plastic bag and a fish with plastic in its body. Most telling is the tail in a human’s mouth, showing how we are affected by contaminated seafood.

The changing fortunes of Priti Patel reflect the volatile state of British politics today. After losing her job in PM Theresa May’s cabinet, she’s back in power as home secretary in PM Boris Johnson’s cabinet. But how long will she keep her new job, given that Patel is a staunch pro-Brexiteer who wants to take the U.K. out of the European Union? Much will depend on how the British politicians handle the Brexit crisis.

When the news broke, it sent shock waves through sections of the Indian-American community. Usha Reddi said that her retired physician father, now 76, had raped her when she was growing up in Virginia and Ohio. There was a confession on tape to prove it, but because of the statute of limitations—and a plea bargain—he will spend only one year in prison. Reddi will serve as mayor of Manhattan in Kansas for the third time.

Salman Rushdie is in the news again, though it has nothing to do with page 6 celebrity gossip this time. The former Emory professor’s new novel, Quichotte, longlisted for the Man Booker Prize, is a boisterous, updated reimagining of Don Quixote. “This spellbinding, many-limbed saga of lives derailing in the ‘Age of Anything-Can-Happen’ is a wily frolic and a seismic denunciation,” according to Booklist in a starred review.

Sajid Javid, who was home secretary in the previous British administration, is now chancellor of the exchequer in the Boris Johnson cabinet. The post is equivalent to treasury secretary in the U.S. Javid’s parents had immigrated to the U.K. from Pakistan. Two other South Asian Brits—Alok Sharma, international development secretary, and Rishi Sunak, chief secretary to treasury—are also in the latest British cabinet. 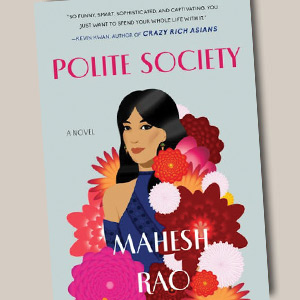 Polite Society (G.P. Putnam’s Sons) – by Mahesh Rao. Another title for Rao’s novel could be High Society or, as a newspaper puts it, Crazy Rich Indians. We are in Jane Austen territory again, except that Emma is the inspiration now and the author is an Indian male who takes the reader to Delhi for a biting satire of the moneyed elite, with Ania Khurana at the story’s center. Dearly loved and glamorous, she’s an unofficial matchmaker with lots of free time—and is, well, clueless. That last word was the title of a screen adaptation based loosely on Emma, and now there’s word that Polite Society will be made into a film as well. It’s an auspicious debut for Rao—or “Vikram Seth’s naughty younger brother,” as another writer called him. Rao’s earlier novel and a collection of his short stories were published in the U.K., where he had been a lawyer before turning to fiction. Rao, who grew up in Kenya, is now mostly based in India. 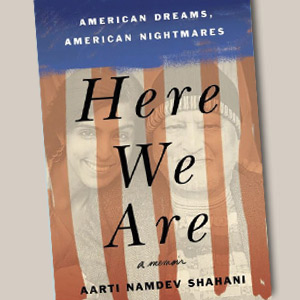 Here We Are: American Dreams, American Nightmares (Celadon Books) – by Aarti Namdev Shahani. This memoir by NPR’s business correspondent in Silicon Valley generated some buzz before its release. The business here is personal, dwelling on painful episodes of her family’s life in the U.S. While Shahani has attended top prep schools and universities, earning a master’s in public policy from Harvard, and won impressive awards and scholarships, her immigrant father’s life here was marked by struggle. Undocumented at first, he was later arrested for mistakenly selling merchandise to a drug cartel, throwing her family into turmoil. Becoming an activist, she fought vigorously for his release. While her father was able to avoid deportation, he died shortly after becoming a U.S. citizen. “I ran away from this book for quite a few years,” she notes. “I worried that by revisiting the past, I’d be trapped in it.” But she felt compelled to share the story and, just as important, show how the American judicial system doesn’t work for many people. 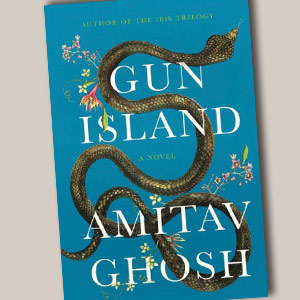 Gun Island (Farrar, Straus, & Giroux) – by Amitav Ghosh. In his latest novel, Ghosh touches on myth, migration, and magic. Most important is perhaps climate change, an increasing preoccupation for Ghosh, who argued in The Great Derangement that the disconnect between humans and the nonhuman world came at a great cost to the environment. Here, Ghosh tries to bridge the gap. Dean Datta, a New York-based rare book dealer, has a startling encounter with a cobra in the Sundarbans of eastern India, leading to a chain of events that takes him back to America via Venice—and also back in time. Datta learns about the legend of Manasa Devi, the goddess of snakes, and then there are the two women who shape his intellectual adventure. “In this Bengali Da Vinci Code,” writes Johanna Thomas-Corr in The Sunday Times (U.K.), “Ghosh draws strong parallels between human and animal displacement, as refugee boats and migrating whales meet in the ocean.” 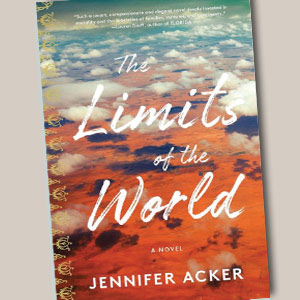 The Limits of the World (Delphinium Books) – by Jennifer Acker. The author mentions M. G. Vassanji and Peter Kimani as writers who have given her insights into East Africa’s Indian community. Acker, though, grew up in rural Maine and has no Indian ancestry, making her sweeping, well-praised novel about the diaspora all the more remarkable. “In this wise, loving book I saw my mother’s family, exiled from Nairobi; I saw me,” says Suketu Mehta. Acker points out that she’s a generalist who likes doing research. More revealingly, she’s married to an Indian-American with roots in East Africa. Like the Chandarias in Acker’s novel, his family had to reinvent themselves in the U.S. In fact, her husband seems to have been the inspiration for Sunil, the younger Chandaria who secretly marries a Jewish woman. And then there is the other secret involving a cousin, Bimal, who turns out to be Sunil’s older brother. The Chandarias may be thriving in this country, but the placid surface conceals a bubbling cauldron.