A celebration of the Elephanta Caves 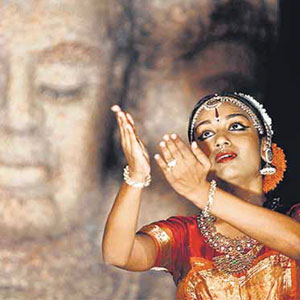 No worries if you missed the Elephanta Festival this year. The good news is that there will be other opportunities down the road. Following a two-year hiatus, caused by the 2008 terrorist attacks in Mumbai, the festival is back on track and drawing visitors to the island of Gharapuri, a seven-mile boat ride from the Gateway of India. (Note for those not familiar with India: You won’t see any elephants at the Elephanta Festival.)

The island is known for its cave temples dating back to the fifth through eighth (or later) centuries. Lord Shiva holds pride of place in the main complex, occupying about 60,000 square feet, and he is depicted in various forms throughout the temples. There is also a smaller group of Buddhist caves. When Portuguese explorers came across these caves centuries ago, they were stunned—but not in an admiring way. What they had in mind was plunder. Fortunately, despite the damage, the caves proved to be indestructible.

Why “Elephanta?” The explorers supposedly found an elephant-shaped rock sculpture at the entrance of the caves. It sank in the ocean when they tried to take it home, but the name remained. This City of Caves was declared a UNESCO World Heritage Site in 1987. In 2008, the terrorists began their assault near the Gateway of India after arriving on boats. Soon afterwards, the night ferry service to Elephanta Caves was suspended.

Performers at the 2011 festival included Dr. Raja and Radha Reddy—the famed duo of Kuchipudi—and Pandit Shivkumar Sharma, who played the santoor. There was also a Bharatanatyam recital by Geeta Chandran, along with performances by vocalist Devaki Pandit and by folk artists belonging to the island.