A Walker in India's Capital 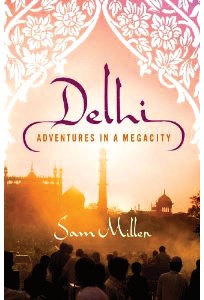 These two cities are quite different, like the books, but both authors share an enviable ability to bring a major Indian metro to life, making it lovable—and, yes, livable—despite all its flaws. Miller’s passion for this monstrous, addictive city, as he calls it, vacillates between attraction and repulsion. His portrayal is episodic, and some readers may miss the narrative build-up that made Mehta’s book so memorable. All the same, Miller’s Delhi: Adventures in a Megacity is often deliciously funny, with an outsider-insider perspective that’s refreshing. This U.K.-born author, married to a Parsi from Mumbai, is a longtime resident of Delhi, where he worked as a BBC correspondent.

Judging by several accounts, Delhi is emerging as India’s most vibrant, happening city. Its rich historical legacy helps, as does the presence of the central government, which has raised Delhi’s profile. But the challenges have also increased, along with the number of residents. By 2004, Miller points out, the city’s population exceeded 15 million (over 20 million if you include the suburbs). Delhi has more cars than Mumbai, Chennai and Kolkata combined. The Yamuna River is an open sewer, with over two billion liters of waste flowing into it every day. Not surprisingly, its water is black. The Delhi rapid transit rail system, on the other hand, is a wonderful success story. Over 1000 spots in the city have ancient ruins. More than 25 streets, localities and institutions are named after Gandhi. “He has the indignity of having one of the city’s longest, most congested and most cursed roads, MG Marg, named after him,” Miller quips.

Miller’s decision to explore the city as a firang flâneur seems both inspired and eccentric. He gets odd looks and questions, since Delhi is hardly the city for strollers; moreover, he sticks out like a sore (or maybe exotic) thumb, despite his knowledge of Hindi and familiarity with India. For Miller, however, walking turns out to be a great way to mingle with the hoi polloi, allowing him to give us crisp snapshots of this teeming metro from anthropological, historical and geographical angles. He meets officious babus, weary expats, ragpickers, wary commuters, policemen, even a friendly crematorium attendant.

Miller thinks Delhi’s emergence into modernity can be traced to 1982, when India hosted the Asian Games. The upcoming Commonwealth Games this year will be another milestone for this megacity, inaugurating a new chapter that is fit for the 21st century.

“It has become, for better and for worse, a world city,” Miller writes. “It has everything that is old and everything that is modern. It has its majestic, scattered ruins that, for me, equal those of Rome or Athens or Cairo. But it has largely lost the parochial quality I remembered from the 1990s. Today, Delhi makes the city of my birth, London, quiet and peripheral. Delhi has a sense of continuous decay and regeneration that I have not met elsewhere. I find myself preaching to anyone who will listen that the world ignores Delhi’s current experiments with modernity at its peril.”