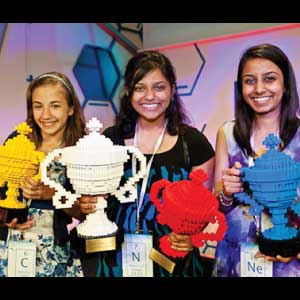 Over 10,000 students from 90 countries sent more than 7500 entries to Google for the inaugural Global Science Fair, billed as the biggest of its kind. Fifteen finalists were invited to the Google headquarters in Mountain View, California, where the prizes were awarded. Shree Bose of Texas took home the top prize. What’s more, in a clean sweep for U.S. girls, the other two prizes went to Naomi Shah of Oregon and Lauren Hodge of Pennsylvania. The results, generating wide interest, were seen as a shot in the arm for women in science, given their underrepresentation in scientific professions.

Bose, participating in the 17-18 age group, found a way to improve ovarian cancer treatment for patients who have developed a resistance to some chemotherapy drugs. She won a $50,000 scholarship, along with an internship at the European Organization for Nuclear Research (CERN) and a chance to visit the Galapagos Islands with a National Geographic team.

Naomi, taking part in the 15-16 age group, set out to show how people suffering from asthma can improve their health without an overreliance on drugs, if they make changes in their internal environment. Lauren, who was in the 13-14 age group, examined potentially harmful carcinogens in grilled chicken. Both Naomi and Lauren received $25,000 scholarships, along with internships at Google or LEGO and a lifetime digital subscription to Scientific American magazine.