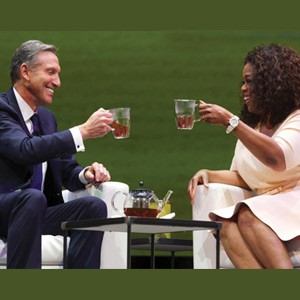 For those who love to sip hot beverages at coffee houses, it may only get harder to resist the habit. Oprah Winfrey, the grand dame of talk shows, has joined forces with Atlanta-based Teavana and Starbucks to launch her own version of chai, which just became available at select locations. The name—Teavana Oprah Chai Tea—is a mouthful, so perhaps it can be dubbed TOCT (pronounced talked). Oprah doesn’t see it as a commercial venture. For every TOCT sold, Starbucks will donate a portion to an Oprah Winfrey foundation that promotes education among girls. Starbucks bought Teavana for $620 million, though the tea stores continue to operate independently. Teavana’s White Ayurvedic Chai Tea is one of its most popular items.

Where did Oprah get hooked on chai? In India, where she visited a Mumbai family in their one-room home and was bowled over by their hospitality…and tea. After returning to the States, tea became “a bigger part” of her life, as she set off on an obsessive quest to make a cup of chai that would duplicate the bliss she’d experienced in the home of taxi driver Rajesh Hedge and his wife, Parvati. It resulted in TOCT. With the help of tealogist Naoko Tsunoda, Oprah came up with a loose-leaf black tea and rooibos blend that includes cardamom, ginger, cloves, and cinnamon. TOCT will soon be more widely available, both as loose-leaf tea and latte. It was Starbucks CEO Howard Schultz, a celebrity in his own way, who roped in Oprah and agreed to offer a product that combines two of their passions—chai and charity. It’s a perfect cuppa.