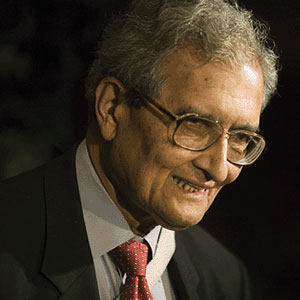 Although Indian universities today lag in world rankings, an ancient university called Nalanda was rated very highly. Its revival has been spearheaded by Nobel laureate Amartya Sen, who turns 80 this year. He’s the chancellor of the brand-new Nalanda International University in Bihar, which is scheduled to open next year. But that’s just one of his many engagements. Currently the Thomas W. Lamont University Professor and professor of economics and philosophy at Harvard University, Sen is the author of several influential books, including the recent An Uncertain Glory: India and its Contradictions, co-written with economist Jean Drèze.

Earlier this year, Sen made it to Prospect magazine’s top 10 list of World Thinkers. In a poll that drew over 10,000 votes from more than 100 nations, Sen ranked number 7. So, appropriately, this public intellectual’s newest book kicked up a furious debate, pitting him against Jagdish Bhagwati, another distinguished economist. Simply stated, Bhagwati and his collaborator Arvind Panagariya, both based at Columbia University, trust the mechanism of markets, arguing that an emphasis on economic growth will lift all boats in India. But Sen and Drèze focus on what they call participatory growth, saying that the right kind of state intervention can make a difference. “In fact, the so-called ‘Asian experience,’ beginning with Japan in the late nineteenth century, then South Korea, Taiwan, Singapore, and eventually all of China, has been based on a skilful use of the complementarity of economic expansion and human advancement through education, health care, better nutrition, and other determinants of human capability,” they write. India, in their opinion, is falling behind because it’s made relatively little use of this two-way relationship.