An Indian-American Surge in the South 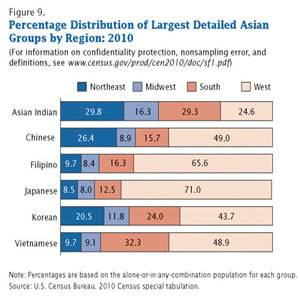 The Indian-American population more than doubled in Georgia over the last decade, as per the latest census figures. And it increased by over 80 percent in three other Southeastern states—Florida, South Carolina and Tennessee.

Indian-Americans form the biggest Asian group in 23 states, of which 13 are in the South. Yes, Georgia is one of them, along with North Carolina, South Carolina, Tennessee, Alabama and Florida. What about the Indian-American community in metro areas? It has, according to the Census Bureau, “the largest alone-or-in-any-combination population in six of the 20 metro areas with the largest Asian alone-or-in-combination population.” Two are in the South and none in the West. Of these, the metro areas with the biggest Indian-American population are as follows: (1) Chicago-Joliet-Naperville, (2) Washington-Arlington-Alexandria, (3) Dallas-Fort Worth-Arlington, (4) Philadelphia-Camden-Wilmington, (5) Atlanta-Sandy Springs-Marietta and (6) Detroit-Warren-Livonia.