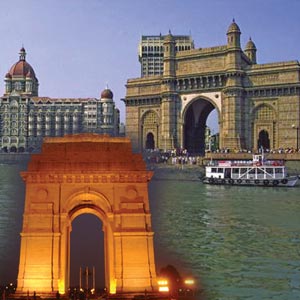 Though both India Gate (in Delhi) and the Gateway of India (in Mumbai) were built in the colonial era, they are hardly seen anymore as reminders of the British Raj. Instead, now it’s more common to think of them as iconic monuments of independent India.

Every year in January, the Republic Day parade passes through India Gate on its way to Red Fort from Rashtrapati Bhavan, the Presidential House. And for the past 40 years, since the India-Pakistan war of 1971, a flame under the arch has marked the Tomb of the Unknown Soldier. This space had once been occupied by the statue of King George V. India Gate, conceived by architect Edwin Lutyens, turns 80 in 2011, although the foundation stone was laid 90 years ago. Standing 42 meters high, this monument in India’s capital remains a perennial tourist attraction.

The Gateway of India also draws visitors throughout the year. It is close to the Taj Mahal Hotel (another famous landmark that became even more beloved after the 2008 terrorist attacks) and one can take the ferry from there to visit the Elephanta Caves. Designed by George Wittet, the Gateway of India stands 26 meters high, making it less imposing than India Gate. Nevertheless, its historical legacy is just as rich. The foundation stone was laid a century ago, in 1911, to commemorate King George V’s visit to Bombay that year. The unveiling took place after the construction was finished in 1924.