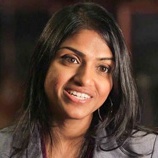 Saru Jayaraman, who appeared at Atlanta’s Carter Center earlier this year, fights for the rights of restaurant workers. The only Indian-American among the five Ashoka USA Fellows in 2013, she heads the University of California-Berkeley’s Food Labor Research Center and is co-founder of a nonprofit that’s making progress in improving the working standards of the industry’s labor force. The restaurant industry, with over 10 million workers, is one of the nation’s largest employers. Restaurants often give the least desirable jobs to darker-skinned people, Jayaraman notes. In a survey of 4,323 employees, her team found that 6.1 percent of the dishwashers in restaurants were white. The industry has 7 of the nation’s 11 lowest-paying jobs. Only 20 percent of restaurant jobs offer a livable wage, with nonwhites, women, and immigrants lagging behind.

What motivated Jayaraman, the author of Behind the Kitchen Door, to follow this path?

“I grew up in a Chicano neighborhood east of Los Angeles and witnessed injustices faced by my own [Indian] immigrant parents and the working class families of my classmates,” she told Forbes. That’s not all. About a year after she received her J.D. from Yale Law School—earlier, she’d graduated from Harvard’s Kennedy School of Government—9/11 happened, changing her life. When the World Trade Center fell, the famed Windows on the World restaurant lost 73 workers and 250 of its largely immigrant staff were displaced. And across the city, as a result of this calamity, more than 13,000 restaurant workers were without jobs. A union worker called Jayaraman and asked her to start an organization to help these displaced workers. This year, the Center for American Progress picked Jayaraman as one of the “top 13 women of color to watch.”