EIGHT NOTABLE ITEMS BEHIND THE HEADLINES 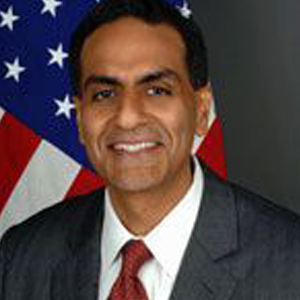 Many people already know about Richard Verma, the newly appointed U.S. Ambassador to India, and Dr. Vivek Murthy, the new U.S. Surgeon General. But who is Arun Majumdar, another U.S. envoy who also began his job recently?

Richard Verma, of course, made history when he became the first Indian-American U.S. Ambassador in Delhi, where his arrival last month just weeks before Obama’s second visit to India attracted interest and curiosity.

And Vivek Murthy, following a long-awaited confirmation, became one of the youngest Surgeon Generals in U.S. history. The fact that Dr. Murthy’s appointment came after a one-year delay caused by the NRA’s vehement opposition made it all the more noteworthy. 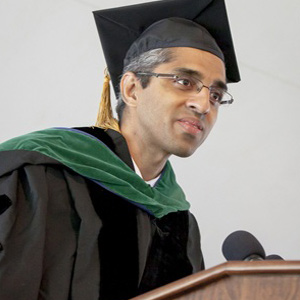 Richard Verma served as a principal advisor to Hilary Clinton when she was the Secretary of State; previously, he’d been a senior national security advisor when Harry Reid was the Senate Majority Leader.

Murthy founded an organization called Doctors for America, which has over 16,000 physicians who focus on providing quality yet affordable health care, and he also started a nonprofit that promotes education on AIDS/HIV here and in India. He practices at Brigham and Women’s Hospital in Boston and teaches at Harvard Medical School. 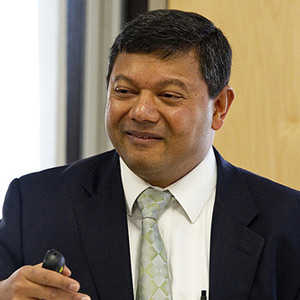 As for Arun Majumdar, well, he is another U.S. envoy appointed by Obama. Along with three other scientists, Majumdar—who specializes in innovation, climate change, and energy at Stanford University—was named a U.S. Science Envoy last month. Their job involves advising the government and forming mutually beneficial partnerships abroad. 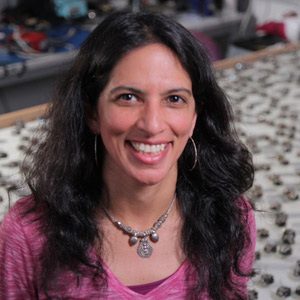 Computer scientist Radhika Nagpal and her colleagues at Harvard University have built robots that work as a team—a team of 1024! Calling them an army of robots would be better, although they’re so small that the name for them is actually kilobots. A kilobot is only a few centimeters tall and wide, but it’s able to move on three vibrating legs and communicate via infrared LED. The light signal from a kilobot bounces off the floor and is picked up by a neighboring kilobot, allowing them to work in tandem. They’ve been described as swarm-like, given their simple yet effective attributes. Not surprising, for it was the behavior of ants that inspired this design.

The kilobot won Science magazine’s Top 10 Breakthrough Award in 2014; earlier, it got first place in AFRON’s $10 Robot Challenge. That’s not a mistake. The idea of creating such an inexpensive robot was to make it use-ful as a low-cost alternative in developing nations like India, where Nagpal grew up before she mov-ed to the U.S. to continue her studies.

So, what do these kilobots do? They can be deployed rapidly—like the military!—to assist in natural disasters or clean up a site that’s become toxic due to an accident or environmental degradation. Nagpal’s team at Harvard is now busy creating more complex (though still small) robots that can take on bigger challenges. Perhaps we can call them megabots. 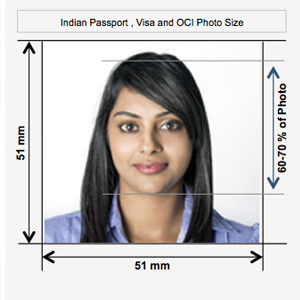 The OCI and PIO cards were merged, as promised, to create just one card—also called OCI—but since not all OCIs are Overseas Citizens of India, the preferred term is Overseas Indian Cardholders. Points to remember: Until now, a minor born to Indian citizens had to show continuous residence in India for a year before becoming eligible for OCI registration. That’s been amended to allow an overseas break of 30 days or less for the minor; the same OCI registration rule applies to spouses of Indian citizens or OCIs after two years of marriage. Moreover, now even grandchildren and great-grandchildren of Indian citizens are eligible for registration as OCIs. The PIO (Person of Indian Origin) card has been discontinued.

In related news, handwritten Indian passports (issued mostly in the ’90s and earlier) have to be replaced by machine-readable passports, while Indian passports valid for less than six months or those with less than two visa pages remaining have to be renewed before making an international trip. Also, for citizens of 43 countries, the Tourist Visa on Arrival (TVoA) option is now available at nine airports in India. 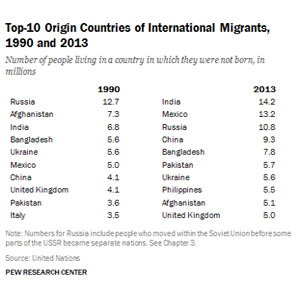 The Indian-born migrant population doubled between 1990 and 2013 to reach 14 million, according to a recent U.N. report. No other nation has more of its native-born people scattered across the world. The U.A.E. (2.9 million) has the most number of these Indian immigrants, followed by the U.S. (2.2 million), where the number of India-born residents has doubled since 2000. Saudi Arabia is home to 1.8 million Indian-born migrants, while Britain and Canada have 0.8 million and 0.5 million, respectively. After India, Mexico sends the most migrants (13 million) worldwide, followed by Russia and China. The U.A.E. may have more Indian-born people, but if we were to combine those born inside and outside India, the U.S. (3.5 million) has more Indians than any other foreign nation. Indian-Americans form roughly 1 percent of the American population.

When it comes to remittances from the diaspora, India ($71 billion) received the most in 2013, followed by China ($60 billion). 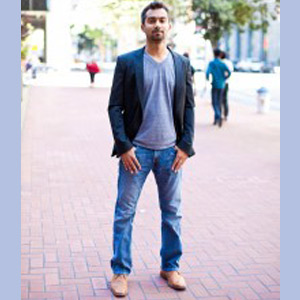 What’s so special about Instacart—founded by Apoorva Mehta, a former Amazon executive—which delivers groceries to your home? Rather than using its own fleet of vehicles and drivers in various cities, Instacart’s breakthrough was to create an app that allows it to rely on a network of independent drivers who do the deliveries for a commission. This “Uber” for the grocery shopper is on a roll. Recently, Instacart—now valued at $2 billion—raised $220 million and its orders in 2014 went up by a hundred times from 2013. There are some skeptics. “Most Americans live within two miles from multiple grocery stores,” Forrester analyst Sucharita Mulpuru was quoted as saying. “Consumers don’t want to pay for grocery delivery service.”

Speed is the key—groceries can be delivered under an hour sometimes—and it’s a convenience for those who cannot make it to the store or don’t have the time to shop. You pay $5.99 for a one-hour delivery and $3.99 if it takes two hours. Instacart is currently available in Atlanta, Austin, Boston, Boulder, Chicago, Denver, Houston, Los Angeles, New York City, Philadelphia, Portland, San Francisco, San Jose, Seattle, and Washington, D.C. “Awesome grocery delivery from Instacart,” tweeted one satisfied customer. “They do Costco, Whole Foods, Safeway, and more.” 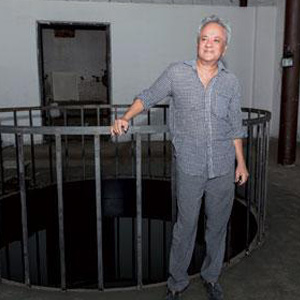 If sculptor Anish Kapoor’s earlier “Ascension” resembled a swirling column of smoke, his “Descension” can be seen as a churning whirlpool of water that can swallow anything into its black hole. Kapoor doesn’t like to do things on a minor scale. Known for his massive, sometimes quirky art installations, he arrives on the culture scene with a big bang. It’s no different at the second Kochi-Muziris Biennale, where his “Descension” at Aspinwall House has an appropriately intriguing appearance that would appeal to physicists as much as art lovers.

Some of Kapoor’s other major artworks include the ArcelorMittal Orbit (London), Cloud Gate (Chicago), Leviathan (Paris), and Sky Mirror (Dallas). The son of a Hindu father and Jewish mother (Kapoor’s grandfather was a cantor at a Pune synagogue), Kapoor was raised in India before he moved to the U.K. at the age of 18. Some of his detractors have called him a “scrap metal merchant,” but there’s no stopping Kapoor. He has been chosen for a solo show at France’s Palace of Versailles, no less, where it will run from June to October this year. That’s bound to be a hot ticket. 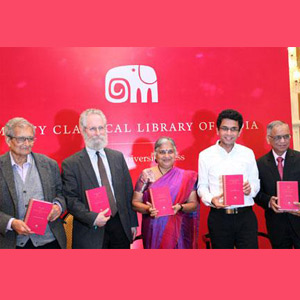 “Murty saves Clay” would be a good way to describe the Murty Classical Library of India, an ambitious undertaking to present the great works of the subcontinent in various languages from the last two millennia in handsomely designed volumes. A decade ago, the Clay Foundation and New York University put out a similar series and published numerous volumes before the project went bust. Fortunately, Harvard University stepped in and resumed the series by wooing a wealthy donor, Rohan Murty, the son of Infosys founder Narayana Murthy. Then a doctoral candidate in computer science at Harvard, Murty contributed $5.2 million to the project. Columbia University’s Prof. Sheldon Pollock, who was involved with the Clay series, remains the editor.

A defining feature of the Clay series was that, alongside a new English translation on the right page, the original text (transliterated into English) appeared on the left page. This format continues in the Murty series, except that now the text appearing on the left page is in the original script, which could be Bangla, Hindi, Kannada, Marathi, Pali, Punjabi, Persian, Sanskrit, Sindhi, Tamil, Telugu, or Urdu. The volumes available so far are Sufi Lyrics, The History of Akbar: Volume 1, Therigatha: Poems of the First Buddhist Women, The Story of Manu, and Sur’s Ocean: Poems from the Early Tradition. Forthcoming titles include Ghalib’s Poetry and Prose, Kampan’s Ramayana, and Guru Granth Sahib, among others. 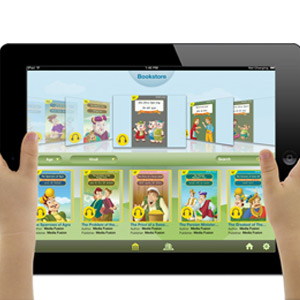 StoryTruck, an app for children’s books in English and several Indian languages, has added 250 titles to its collection, bringing the total to over 700 books. StoryTruck’s digital library has Indian classics (Panchatantra, Tenali Raman, Jataka tales, Akbar and Birbal, etc.) and Western favorites like Beauty and the Beast, Cinderella, and Goldilocks that children can read or listen to, either on a mobile device or a desktop, in an accessible format and without interruptions by ads. So, yes, it’s a paid subscription. Silicon Valley-based Mohan Rao, who developed the app, saw a need to bring, in a convenient and attractive manner, Indian stories in Indian languages to children who may be cut off from their roots. Many titles are available in Bengali, English, Gujarati, Hindi, Kannada, Malayalam, Marathi, Tamil, and Telugu.