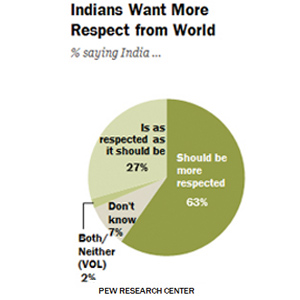 Now that India’s general election has entered its final phase and the drama is building to a climax, what can we expect from the next government? Only time will tell. In the meantime—rather, for a long time—Indian citizens haven’t been shy about expressing their disappointment and anger over how their nation is doing. And they’ve been vocal about their demands. A recent PEW survey touching on various issues can act as a gauge of the Indian voter’s ugly mood.

No matter which party they supported, 70 percent were dissatisfied with the way things are going, while only 29 percent seemed pleased with the status quo.

So, what were the biggest concerns?

Rising prices (89 percent) and terrorism (88 percent) ranked high, along with corruption among the business and political class (83 percent) and inequality (82 percent). Unhappiness over the lack of employment opportunities was higher in northern India than in southern or western India. The less privileged, not surprisingly, were more troubled by inequality—but even among the well-off, it reached 74 percent. When it came to parliamentary and political gridlock, 65 percent said it was a huge problem for India.

Nevertheless, the survey held out some hope, with 64 percent expecting India’s future generations to do better as adults. In fact, perhaps because those who were surveyed had the election in mind, 62 percent expected the economy to start improving over the next 12 months.