Bollywood Among the Call Centers 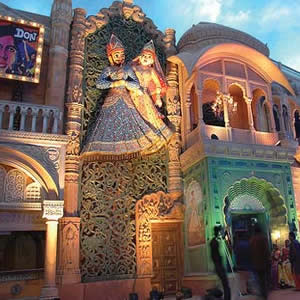 Gurgaon is a Call Center Capital, but did you know that it’s also home to Bollyland?

No, that’s not the official name, though it could well be. Called the Kingdom of Dreams, this theatre and leisure destination in India’s National Capital Region can best be described as a cross between Bollywood and Disneyland. Or perhaps Broadway and Las Vegas, with an Indian twist.

Inspired by extravagant shows like The Merchants of Bollywood and Bombay Dreams, not to mention Bollywood films, two companies—Wizcraft and Apra Group—decided to create a “spectacle so grand it can fit only in your dreams.” It fits, in reality, on six acres of land, which house Nautanki Mahal and Showshaa Theatre, along with Culture Gully and a lounge called IIFA Buzz. Nautanki Mahal focuses on Bollywood-style musicals, and Showshaa Theatre is meant for mythological enactments (Ram Lila, Krishna Lila, etc.) and interactive shows like My Big Fat Indian Wedding.

A lavish musical titled Zangoora, the Gypsy Prince is the main attraction these days. Ticket prices range from 1000 to 6000 rupees—which means ordinary folks aren’t rushing to see it. Even though tickets are easy to get if you have a hankering for live Bollywood-style entertainment on a mega scale, the crowds could get bigger once Culture Gully—showcasing the traditions of 14 Indian states—opens. You should then be able to get a massage at the Goan shack, admire Buddhist paintings, sip Assamese tea and sample regional cuisine at any of the six restaurants. To get in, you will have to buy an entry ticket—or rather a charge card that’s worth 500 rupees and can be used only here.

So what’s Zangoora about? Set in the kingdom of Shaktishila, this coming-of-age story involves a gypsy boy, Zangoora, who’s drawn to—surprise!—two women: Princess Sonali and Laachi, a gypsy girl. Guess which gal the guy gets?