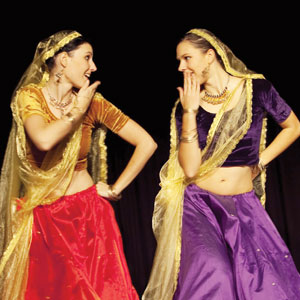 You might have heard of the Mayuri dancers who were in this country not long ago. They perform Bollywood and classical Indian dances. Understandable, given their name, but what drew attention was that all eight members are ethnic Russians from Petrozavodsk, where the Mayuri Dance Group was formed in 1987.

There are other such dancers. Take Domenika Arnetzeder, an Austrian who founded a company named Padmaya Dance Arts. Sangita Shresthova, another aficionado who is also a dance scholar, interviewed her for an entertainment outlet she calls Bollynatyam. Arnetzeder began watching Bollywood programs and films on German television, and got totally hooked in 2004 when she saw Dil Ka Rishta. It pushed her to become an instructor and performer. As for Shresthova, who is half-Nepali and half-Czech, her passion led her to launch the Global Bollywood Dance Project, which is an ambitious attempt to map Bollywood dance schools across the world and tell their stories. It also resulted in a book, which she dubbed Is It All About Hips? Around the World with Bollywood Dance. An exponent of Charya Nritya (Nepali Dance), along with Bharatanatyam and Kalaripayattu (Keralan martial dance), she co-organizes the annual Prague Bollywood Festival. It’s usually held in October at the Svetozor arts complex, where Indian films are screened. There is even a brightly adorned Bollywood truck.