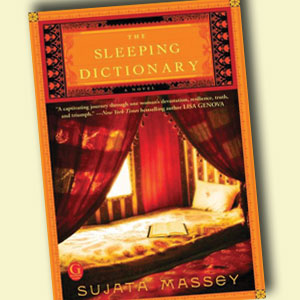 The Sleeping Dictionary (Gallery Books) by Sujata Massey. Born in the U.K. to a German mother and an Indian father, Massey grew up in the U.S., although it was Japan—where she did a stint teaching English— that inspired her 10 Rei Shimura mystery novels, for which she won the Agatha and the Macavity Award. Massey, a former newspaper correspondent, then turned to her Indian heritage for inspiration. It resulted in her latest suspenseful novel, The Sleeping Dictionary, which is about a young Bengali woman caught up in the tumult of the British Raj’s waning decades. The term “sleeping dictionaries” referred to women who, as a result of their often forbidden relationships with the British, were able to educate these men about India. Massey, who studied Hindi for a year, conducted many interviews and did archival research in India and the West, taking several years to write her novel. “Bringing the old Calcutta alive, with all its intellectual hangouts, pastry shops, and residences, was the best part for me, because I love the city so much,” she notes. 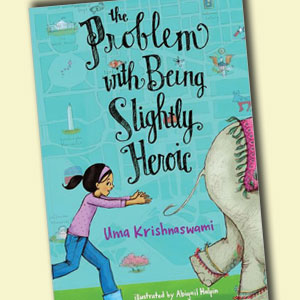 The Problem with Being Slightly Heroic (Atheneum) by Uma Krishnaswami, illustrations by Abigail Halpin. Krishnaswami’s new “Bolly Book” meant for readers in grades 3 to 7 comes on the heels of The Grand Plan to Fix Everything, reissued earlier this year. The first book, which got starred reviews from Publishers Weekly and Kirkus, introduced us to Dini, a movie-besotted 11-year-old who moves with her parents from Maryland to India. But their destination is Swapnagiri rather than Bombay, where Dini’s Bollywood idol Dolly Singh lives. In the sequel, with her Indian adventures over, Dini goes to the U.S. So does Dolly Singh. Will everything go according to plan when Dini and her best friend Maddie, also a star-struck film lover, decide to attend Dolly Singh’s big premiere in D.C.?

The Enduring Ark (Tara Books, reprint edition) by Gita Wolf, illustrations by Joydeb Chitrakar. Lavishly produced in the Bengal Patua style of scroll painting, this Indian take on a famous Biblical tale is meant for readers aged six and up.