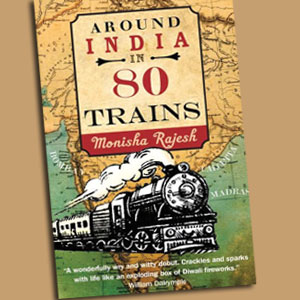 Around India in 80 Trains (Nicholas Brealey Publishing) by Monisha Rajesh. In her nonfiction debut, Rajesh finds the ideal—well, not always ideal—way to understand the country her parents left behind. On planes we usually don’t talk much, and the land is hardly visible. Trains are different.

Rajesh wasn’t a stranger to India, but her sojourn as a preteen in Madras—where her parents had moved back in the early ’90s—hadn’t been very happy, and they’d returned to England after two years. For Rajesh, a journalist with The Week in London, this visit as an adult was not only to reconnect with India, but also to relive the romance of the rails. Plus she wanted to get out of cold, dreary London. Of course, “romance” is not a word that comes to mind when we think of the Indian Railways, although its royal trains promised that experience. For four months, using an IndRail pass, Rajesh traveled on trains big and small, fast and slow, luxurious and dilapidated, covering a good part of the country.

An article about how India’s domestic airlines could reach 80 cities inspired her, as did Jules Verne’s Around the World in 80 Days. In fact, she dubs her travel companion Passepartout—which, in Verne’s novel, is the funny sidekick’s name. As a young single woman, Rajesh knew early on, it wouldn’t be wise for her to travel alone everywhere. Just in time, a Norwegian-born photographer in the U.K. appeared on the scene and expressed an interest to accompany her. She agreed, and soon they set off for India.

Rajesh’s humor-laden book takes us far from the two cities (Madras and Hyderabad) she’d known from previous family visits. Since many travelers won’t have her patience to board 80 trains, what are the top 10 Indian journeys? Here’s her list: (1) Darjeeling Toy Train, (2) Duronto Express, (3) Goa to Londa, (4) Golden Chariot, (5) Guwahati to Ledo, (6) Indian Maharaja, (7) Jammu to Udhampur, (8) Kalka to Shimla Toy Train, (9) Kanyakumari to Trivandrum, (10) Mandovi Express. 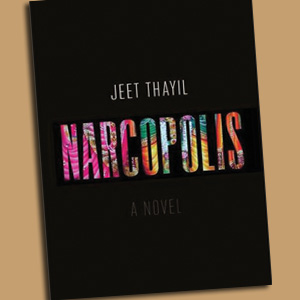 Narcopolis (Penguin Press) by Jeet Thayil. Did Thayil, whose debut novel was shortlisted for the 2012 Man Booker Prize and the 2013 Hindu Literary Prize, really lose 20 years of his life? Yes, in a manner of speaking, because of a crippling alcohol and drug addiction. Now cured, Thayil, an acclaimed poet, has won the 2013 DSC Prize for South Asian Literature for Narcopolis, becoming the first Indian to win this $50,000 award.

What’s it about? “Bombay, which obliterated its own history by changing its name and surgically altering its face, is the hero or heroin of this story...” begins the prologue, and goes on for a while in this bravura fashion with not a period in sight. Thayil’s most recent poetry collection won the 2012 Sahitya Akademi Award for English. The Shakti Bhatt First Book Prize was named after Thayil’s late wife. 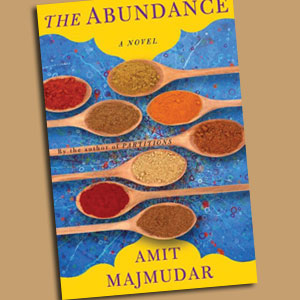 The Abundance (Metropolitan Books) by Amit Majmudar. The author of award-winning poetry and an acclaimed novel called Partitions, Majmudar is a radiologist based in the Midwest. Appropriately, then, the privileged world of professionally accomplished Indian-Americans is the theme of his second novel. Although these folks are materially well off, there is intergenerational conflict and spiritual angst, with the shadow of death looming over them. It’s a familiar topic in a familiar setting, but every story is unique. Maya and Ronak are drawn back to the immigrant world of their mortally ill mother. Her cooking skills, which she imparts to Maya, provide comfort and facilitate bonding, helping to bridge the immigrant-native rift. But will Ronak’s idea for a cooking-as-healing memoir create discord in the family, leaving a bitter aftertaste?

Majmudar, whose first novel focused on the subcontinent’s partition, is a three-time winner of the Katha Contest. In his second novel, he offers his thoughts on what compels him. “Authors aren’t granted much insight into their own work, but it seems to me that I write my novels out of fears I cannot overcome in any other way,” Majmudar says. “My first novel sprang, in retrospect, from fear for my sons, the fear of some danger from which I would not be able to protect them. This novel, even though it is written from the perspective of the mother of a family, gives form to my fear of losing a parent.”