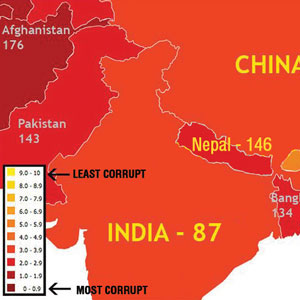 Telecommunications, mining, Commonwealth Games. These are just three recent examples of the Corruption Raj that have sunk deep roots in India. The latest scandal—involving politicians, business tycoons, lobbyists and media folks—has become so infamous that it can simply be identified by one number and one letter: 2G. It stands for second-generation mobile telephony, which is at the heart of India’s biggest, juiciest corruption case in years. Here’s a more meaningful definition of 2G: Giant Graft.

Corruption in India is not new, of course. Since 1948, reportedly, $462 billion has disappeared in illicit financial flow. And for many Indians, it’s no surprise that the problem is getting worse. In fact, according to the TI (Transparency International) “Global Corruption Barometer 2010,” 74 percent of the respondents surveyed say that India’s level of corruption has gone up in the past three years. In TI’s ranking of 178 countries, with 1 representing the least corrupt nation, India’s position rose from 84 (in 2009) to 87 (in 2010). Judging by the current news in India, there will be no downward swing this year.

Only 16 percent of those surveyed say that India’s corruption level has remained the same in the last three years. The three P’s (political parties, parliament/legislature, police) are the worst offenders, with scores of 4 or higher (5 denotes the worst corruption). Public officials scored 3.5, while the media, the private sector, the judiciary, the education system and NGOs are not far behind. Only the military and religious bodies scored below 3. In 2010, India was one of the 12 nations that saw the largest hike in bribery payments. About 54 percent of Indians gave a bribe in the last 12 months.