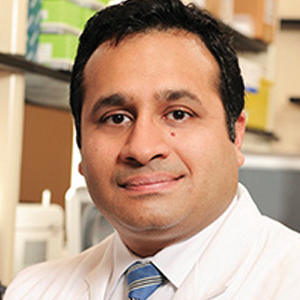 Dr. Aneesh Mehta, an associate professor of infectious diseases at the Emory School of Medicine, has been in the news lately. His team has developed a simple blood test that can in 24 hours tell us about the antibody response of a coronavirus-exposed individual. Dr. Mehta, who played a lead role in tackling the Ebola crisis, is also involved in testing the effectiveness of the drug remdesivir to combat Covid-19..

Flyod Cardoz,who became a victim of Covid-19 at the age of 59, had won Bravo’s “Top Chef Masters” in 2011. Although that brought wider recognition, he was already known by then for his innovative restaurants, such as the former Tabla in New York, and trailblazing fusion dishes. The Goan-born chef, who’d also opened restaurants in Mumbai, was famous for adding Indian touches to French and American cuisine.

Minal Dakhave Bhosale, a virologist in Pune, led a research team at Mylab Discovery to design the first fully approved coronavirus testing kit in India. Called Patho Detect, the easy-to-use kit is about $16 and can test up to 100 people. Demand has soared because it is affordable and takes only two hours to get the result. The kit, made in six weeks, was submitted for evaluation just a day before Bhosale gave birth to her child.

Gita Ramjee, a notable AIDS researcher, was another victim of Covid-19 in the Indian diaspora. A South African by nationality, though she was born in Uganda, Ramjee had visited London before her death in Durban. She was chief scientific officer at the Aurum Institute in Johannesburg. Ramjee’s breakthrough AIDS research focused on women in Africa, especially those who worked in the sex industry.

Abijith Krishnan, an International Physics Olympiad gold medalist who was born in North Carolina, is one of the 30 Paul & Daisy Soros Fellows for New Americans this year. Each scholarship, open to immigrants and their children, is worth $90,000 and supports two years of graduate studies. Other recipients include Pooja Reddy, Akil Iyer, Riana Shah, Sanath Devalapurkar, Meena Jagadeesan and Shyam Akula.

Raja Kumari, who made it to the cover of Rolling Stone magazine’s Indian edition, raps in both English and Hindi. But though Kumari spends a lot of time in India, she’s not from there. Born in California to immigrants from India, her given name was Seetha Yellapragada Rao. The rising rapper, who won a Grammy nomination, has collaborated with notable artists, including Divine, who inspired the film Gully Boy.

Brahm Kanchibotla, a journalist from Long Island, New York, was also struck by the coronavirus. Following a cardiac arrest, he died at the age of 66. A contributor to the United News of India, he was a content editor as well at another outlet. Before immigrating to the U.S., he’d worked for The Indian Express in Hyderabad. Covid-19 has already claimed the lives of many South Asian Americans.

COV-INDIAN H-1B DOCS IN THE TRENCHES Covidiot is an internet meme, thanks to thoughtless people who ignore health guidelines or indulge in hoarding. But “Cov” could be used in a positive sense as well, because the tragedy caused by Covid-19 has produced so many heroes worth saluting. As we’ve seen, nowhere are these heroes more prevalent than among first responders and medical workers, both here and abroad. Indian physicians on H-1B visas are a subset of the latter group. Not only are they exposed to health risks, like other medical professionals battling Covid-19 in the trenches, but they also have to worry about their visa status. Becoming ill is a problem, especially if it takes a long while to recover, since they could lose their job and, consequently, their ability to remain in the country. There are over 10,000 doctors on H-1B visas from various nations.

Rural America has so far not borne the brunt of the pandemic. However, if conditions worsen there, as expected, understaffed rural hospitals will face additional challenges due to these visa restrictions. Foreign medical doctors on non-immigrant visas are drawn to underserved regions after their residency. Given the backlog for immigrant visas, they often end up staying for more than the required three years. But that doesn’t mean they can move to another rural hospital, even if there’s a sudden need there because of Covid-19. And if they get sick, their hospital—and patients—will face problems if they can’t get an immediate replacement. Meanwhile, because U.S. consular services have been suspended, it’s unclear when foreign medical graduates with residencies will be able to get their J-1 visas and come here to help with the crisis.

ANGLO-INDIANS: END OF THE LINE Six generations in the railways of India. That’s the legacy of one Anglo-Indian family, whose involvement with the railways ended when Noel Fuller, a senior technician in Chennai, retired in late 2019. His two sons broke the Fuller tradition, with one becoming a marine engineer and the other an Indian Army captain. Also, around the same time last year, the Indian government decided to discontinue the two seats reserved for Anglo-Indians in the Lower House (Lok Sabha), marking another turning point in the saga of a once thriving, now diminished community. In their heyday, Anglo-Indians—a mixed race group that was, in the colonial era, caught between British condescension and Indian suspicion—made many contributions, producing air and naval chiefs, actors, sports stars, and writers. Their stories have been told in films such as Bow Barracks Forever, Julie and Bhowani Junction.

Nowhere have the contributions of Anglo-Indians been more striking than in the railways, whose sprawling network helped to knit India together. Jobs were reserved for Anglo-Indians and they embraced their calling with gusto, even forming distinctive railway colonies. Their cuisine included dishes like Railway Mutton Curry. Following Indian independence, many Anglo-Indians emigrated to the West, while others assimilated. Well-known names today include beauty queens Diana Hayden and Lara Dutta, cricketer Roger Binny, and authors Ruskin Bond and Alan Sealy. Coming back to the Fullers, their journey in the railways began with Thomas, Noel’s great-great-great grandfather. His railway descendants were driver John Edward, fireman Albert James, foreman John Burton, and special grade driver Patrick (Noel’s father). In 1856, when the first passenger train in southern India pulled out of Royapuram, Thomas Fuller—listed as a driver—was on board. The Shape of Family (William Morrow) – by Shilpi Somaya Gowda. When Karina’s dad picks her up from soccer practice, early in the novel, there’s some confusion among the parents watching them. Why? Because Karina, whose mother is Indian, has “milky tan skin, dark eyes, thick wavy hair, prominent hair”—and she bears no resemblance to her Caucasian father. One mother even makes sure Karina knows him before letting her go. In case you’re wondering, this happens in 2007. But feeling out of place is not an uncommon experience, and it could be triggered by different circumstances, including a family tragedy. Gowda turns to the Olanders (Prem, Karina’s brother, is the fourth member) to examine those dislocations. “A moving exploration of how loss can change the contours of a life,” notes the author Thrity Umrigar. Gowda, an activist for children, grew up in Canada and is now based in California, where she earned an MBA from Stanford. Her other novels include the bestselling Secret Daughter and The Golden Son. A Burning (Knopf) – by Megha Majumdar. Curious about India’s youthful aspiring class? In her debut novel, Majumdar, who grew up in Kolkata, sheds light on the so-called precariats through the characters of Jivan, a Muslim girl, PT Sir, a right-wing gym teacher with political ambitions, and Lovely, an outcast who hopes her vocal ability will lead to success. An unwise social media post by Jivan gets her into trouble when she’s falsely accused of bombing a train. PT Sir senses political opportunity, but then there is Lovely, who has the ability to prove Jivan’s innocence. Will Lovely, by coming forward to rescue Jivan, jeopardize her own chance for fulfilling her dreams? “Somehow Majmudar succeeds in capturing the boundless energy and starry-eyed hopefulness of the country’s youth,” notes novelist Amitav Ghosh. A Harvard graduate who also studied social anthropology at Johns Hopkins, Majumdar is now an editor at Catapult, an independent publisher in New York. The Boy Who Dreamed of Infinity: A Tale of the Genius Ramanujan (Candlewick) – by Amy Alznauer. Illustrations by Daniel Miyares. It’s hard to believe that Srinivasa Ramanujan, perhaps the most famous mathematician produced by India, died a hundred years ago. He still captures our imagination (a fine movie was released five years ago), and this attractive book will inspire young kids as well. Despite his impoverished background and early death at 32, he made remarkable advances in his field. Alznauer, a mathematician who also writes poetry and essays, uses concrete language and anecdotes to tell the story, while Miyares’ vivid ink drawings make Ramanujan come alive on the page. Alznauer explains how on a trip to England when she was six years old, her mathematician father found Ramanujan’s Last Notebook lying forgotten in a Cambridge library’s archive. Some said it was like discovering Beethoven’s tenth symphony. “And the romance of this story is one of the reasons I studied mathematics in graduate school and still teach it,” she says. Together: The Healing Power of Human Connection in a Sometimes Lonely World (Harper Wave) – by Vivek Murthy. A book about loneliness, now that we’re either stuck indoors or practice social distancing outdoors, is amazingly timely. But Dr. Murthy, who served as the 19th Surgeon General of the United States under President Obama, wrote it before the pandemic— and the fraying of social bonds, which he observed up close during the opioid crisis, has been going on for a while. Not only did he produce the first surgeon general’s report on the opioid epidemic, but he launched a national campaign to address it. And now as the pandemic takes its toll, we’re on the brink of what he calls a social recession. To strengthen social bonds, he asks us to spend time each day with those we love, even if we can’t be near them; focus on each other; embrace solitude; help and be helped. “Healthy relationships are as essential as vaccines and ventilators for our global recovery,” he points out.