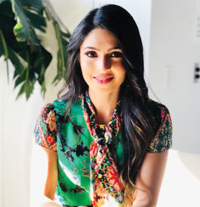 Payal Kadakia is off to a great start in 2020, not just here but in 28 nations. In 2013, she founded ClassPass, the first fitness aggregator. Based in New York, with over 300 employees, the startup became this decade’s first unicorn. Worth over a billion dollars in valuation, it’s just one of a handful of unicorns founded by women. ClassPass members can book from a selection of over 5 million fitness and wellness experiences.

Anjali Nair, the daughter of immigrants with ties to India and Sri Lanka, won the National American Miss Junior Teen 2019-2020 title. A Virginia resident, she won the state’s American Jr. Teen title in 2016. Now a senior at Thomas Jefferson High School for Science and Technology, she’s an animal welfare advocate who has worked to prevent euthanasia and find secure homes for abandoned animals.

Raja Jon Vurputoor Chari may head to the moon as a NASA astronaut. It’s not clear how many astronauts will be picked for the Back to the Moon program, but Chari, having completed the first phase of training, is on the shortlist of 11 astronauts. That number is no coincidence, given the historic importance of NASA’s Apollo 11 mission. Chari’s mother is from the U.S., while his late father had immigrated from India.

Taranjit Singh Sandhu will take over as the Indian ambassador to the U.S., replacing Harsh Vardhan Shringla, who was incidentally his classmate at St. Stephen’s College in Delhi. A veteran diplomat who previously served in Washington, D.C., though not as an envoy, Sandhu’s last stint as an ambassador was in Sri Lanka. He opened the Indian embassy in Ukraine. His wife, Reenat, is the Indian ambassador in Italy.

Tiara Abraham is following in the footsteps of her brother, Tanishq. A child prodigy, Tanishq graduated from American River College in 2015 with three degrees at the ripe old age of 11. Tiara is no slouch either. Having finished high school with a 4.0 GPA, the 13-year-old is now a student at, yes, American River College. Tiara is also a MENSA member and an accomplished singer, with a music album to her credit.

Kshama Sawant is not your typical Indian-American, even among those holding public office. An immigrant from Pune, she abandoned IT for a Ph.D. in economics because she wanted to tackle inequality in America. She won a seat on the Seattle City Council as a socialist—twice. This was despite Amazon’s support for her opponent. And now, in this bastion of capitalism, Sawant is also taking on the tech giant.

Rangan Chatterjee, a British Indian physician known for his Four Pillar plan, drew attention on BBC One’s Doctor in the House, a documentary series in which he visits families in their homes. His 360 degree approach focuses on Food, Movement, Sleep, and Relaxation. Having written several books (The Stress Solution, How to Make Disease Disappear, Feel Better in 5, etc.), he is also gaining traction in North America.

Asheen Phansey is not Iranian-American, as some folks mistakenly thought. He is Indian-American. Phansey, who was an adjunct professor at Babson College, discovered the limits of free speech when he responded to Trump’s tweet about targeting cultural sites with his own comment about targeting cultural sites (as a joke, he said) on his personal Facebook page. His employer, rejecting his explanation, fired him. 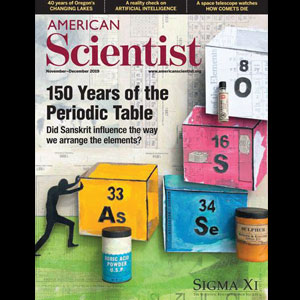 How many married couples have won the Nobel Prize? Six, including last year’s winners in economics: Abhijit Banerjee and Esther Duflo (Michael Kremer was a co-winner). Among these six couples, it turns out, there was another economist—and he also wrote extensively about tackling poverty in South Asia. That was Sweden’s Gunnar Myrdal, who, along with Friedrich Hayek, received the economics Nobel in 1974 (Alva Myrdal, his wife, was a co-winner of the Nobel Peace Prize in 1982). Marie and Pierre Curie were, of course, the most famous Nobel couple, winning the physics prize in 1903. Marie Curie won again in 1911 (for chemistry), while her daughter and son-in-law won the chemistry Nobel in 1935. The other two couples won the physiology or medicine Nobel in 1947 and 2014.

Speaking of chemistry, the first tabular display of chemical elements, devised by Dmitri Mendeleev, is 150 years old. This periodic table’s classification, according to a fascinating cover story in American Scientist (November-December 2019), was influenced by Panini, the great Sanskrit grammarian who lived over two millennia before Mendeleev. In their article, Abhik Ghosh and Paul Kiparsky argue that Panini’s “generative grammar,” in which the rules of language were efficiently compressed into meaningful units with the help of symbols and abbreviations, inspired Mendeleev. The use of Sanskrit numerals eka, dvi, and tri (one, two, and three) as prefixes for still-undiscovered elements is a clear sign of the influence. “Panini’s ordering of the sounds by place of articulation and aperture parallels Mendeleev’s ordering of the elements by their increasing atomic weight,” the authors note. While Panini analyzed the roots of language, Mendeleev turned to nature for his “chemical grammar.”

In the December issue of Khabar, given our printer’s deadline, we couldn’t mention the passing of a few notables in 2019. Veteran actress Shaukat Kaifi (aka Azmi), actress Shabana Azmi’s mother, died at the age of 93. Others included cartoonist Sudhir Dar, actress Gita Siddharth, educationist Suresh Gundu Amonkar, and actor Shriram Lagoo. Then there was Ram Dass, who died in Hawaii at the age of 88. Born Richard Alpert, he was a clinical psychologist at Harvard in the 1960s before his life took an improbable turn. Swept up in that era’s hippie culture (or counterculture), he switched paths after a trip to India, where he met his guru, Neem Karoli Baba, who named him Ram Dass. Be Here Now, which sums up his approach to life, is the title of his popular spiritual guide, a Hippie Bible that remains in print. Dass was partially incapacitated by a stroke in 1997, but he continued to teach and write.

Sonny Mehta, the legendary editor at Knopf, was 77 when he died on December 30th. He was also the chairman of the Knopf Doubleday Publishing Group. Ajai Singh Mehta, to use his given name, was the son of one of independent India’s first diplomats. After his distinguished publishing stint in the U.K., where he published Salman Rushdie and Jackie Collins, among many others, Mehta came to New York and took over at Knopf in 1987. The authors he published included Nobel laureates—V.S. Naipaul, Toni Morrison, Orhan Pamuk, Kazuo Ishiguro—and highly popular writers like Michael Crichton, E.L. James, and Steig Larsson. He won Lifetime Achievement Awards for publishing in the U.S., Britain, and India. His widow, Gita Mehta, is a notable writer of fiction and nonfiction. 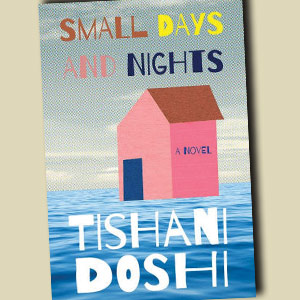 Small Days and Nights (W.W. Norton) – by Tishani Doshi. Poet, dancer, and journalist Doshi, born to Gujarati and Welsh parents, lives in Chennai. Author of The Pleasure Seekers, among other novels, Doshi has ties to Pondicherry as well— and her new novel, an Irish Times Book of the Year 2019, is set in both these cities. Prompted by marital woes and her mother’s death, Grace returns from the U.S. to a changing India. Following her mother’s cremation in Pondicherry, Grace discovers that she now owns an isolated beach house near Chennai. More important, she discovers an older sister, currently living in a facility for disabled residents. Along with her sister, Grace carves out a new life, though it’s not easy. Other characters in this kaleidoscopic novel include a housekeeper, an aunt, and the dogs they adopt. As Phil Baker points out in The Times (U.K.), “Doshi ranges over family secrets, trying to do the right thing, and the sheer contingency of life in all its richness and uncertainty.” 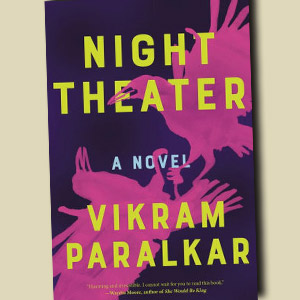 Night Theater (Catapult) – by Vikram Paralkar. Name a desi filmmaker who churns out psychological thrillers that take a surreal turn, giving us the chills. That’s easy, because you don’t have to look beyond M. Night Shyamalan. For fiction, we could turn to Paralkar, a UPenn physician-scientist who’s drawing wider attention with his speculative fiction. In this novel (he also wrote Affliction), the Mumbai-born author takes us on a creepy yet thought-provoking ride, as he “braids philosophy, magical realism, and the complicated facts of health care in the modern age into a compact and compelling story,” according to BuzzFeed. A disgruntled surgeon retreats to a backwater clinic after getting some negative publicity. His life changes when a teacher walks into the clinic with his pregnant wife and son. They’ve been robbed and murdered, they say, but if the surgeon can fix their wounds by daylight, they’ll live again. Will the surgeon get a second chance as well? Both Paralkar and Shyamalan, in a curious coincidence, live in Philadelphia. 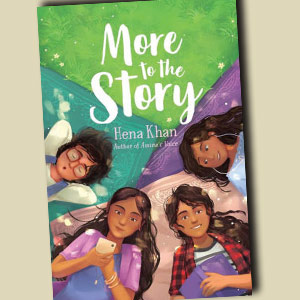 More to the Story (Salaam Reads) – by Hena Khan. Little Women, the recent film based on a beloved 19th-century novel, won wide praise and six Oscar nominations. For a South Asian angle, readers can pick up Khan’s 2019 novel for middle graders. It was inspired by Little Women. Like the March family in Louisa Alcott’s novel, the Mirza family has four sisters who share a tight bond. What’s more, Khan’s novel is set here in Georgia. Jo from Little Women becomes Jameela, a budding journalist who enjoys writing for her middle school newspaper. Her immediate problems include a demanding editor and the intriguing boy she wants to write about for a national media contest. Khan “nimbly incorporates details of modern life and allusions to Alcott’s classic,” notes Publishers Weekly in a starred review, adding that the story is “fittingly, strongest in the moments when family dynamics are on display.” Khan, who also wrote Amina’s Voice and other books for Muslim children, is a Pakistani-American author based in Maryland. 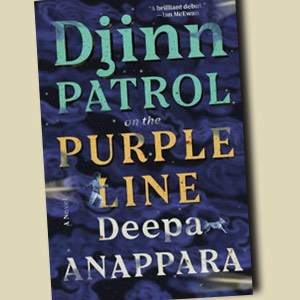 Djinn Patrol on the Purple Line (Random House) – by Deepa Anappara. In India, ordinary bazaar life can inspire extraordinary stories. So it’s not surprising that Anappara, an award-winning journalist who has focused on children’s education, poverty, and religious violence, takes the reader to Bhoot Bazaar in her novel, which the author Ian McEwan called “a brilliant debut.” It features Jai, a 9-year-old boy who helps at a chai shop, and his friends Pari and Faiz. Jai, addicted to cop shows like Police Patrol, becomes a detective when a schoolboy goes missing. Jai and his companions explore rough neighborhoods, going as far as the Purple Line’s last train station. But as more kids vanish, the mystery deepens, drawing the plucky trio into a dangerous netherworld. Is a ghost on the loose, or is it something more sinister? After her journalism stint in India, Anappara, who grew up in Kerala, earned an M.A. in creative writing from the University of East Anglia in Britain.