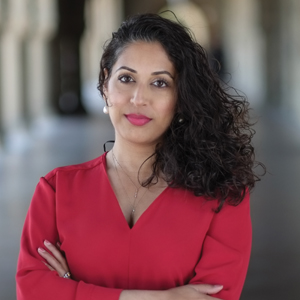 Seema Yasmin, a British-born and U.S.-based physician who studied medicine at Cambridge, makes frequent media appearances to educate viewers and correct misinformation about Covid-19. She’s the director of Stanford’s Health Communication Initiative. An award-winning journalist, she has also worked at the CDC. Her mother, who moved to Britain from India as a child, is a Distinguished Career Institute fellow. 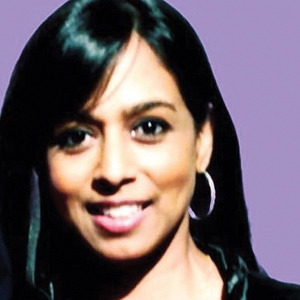 Maya Lakshmi Harris is a little over two years younger than her only sibling, Kamala Devi Harris, the Democratic VP nominee. While Maya Harris has a lower profile than her sister, she’s been visible as well, most prominently as a political commentator for MSNBC. A graduate of Stanford Law School, she’s been her sister’s campaign chairperson. At age 29, she became one of the country’s youngest law school deans ever. 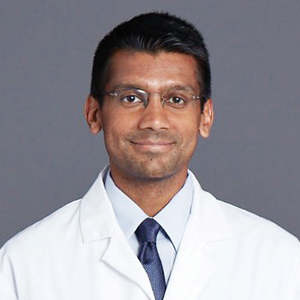 Dave Chokshi, a physician and public health official, is the Health Commissioner of New York City. Only 39 years old, he was a Rhodes scholar at Oxford before earning his medical degree from the University of Pennsylvania. NYC Health + Hospitals is the largest public hospital system in the U.S. Appointed by the mayor, Dr. Chokshi is responsible for the operation and building of medical and healthcare facilities. 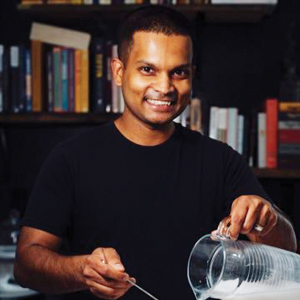 Nik Sharma, a molecular biologist and foodie, combines his two passions to show us how science is as important as art to gain a better understanding of good food preparation. A freelance food writer and a James Beard Award nominee, he’s  a columnist for the San Francisco Chronicle. His forthcoming book is titled The Flavor Equation: The Science of Great Cooking Explained in More Than 100 Essential Recipes. 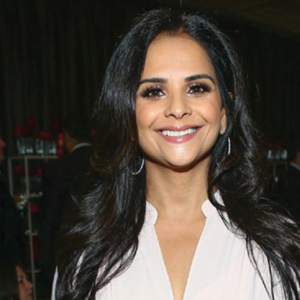 Bela Bajaria is now VP of Global Television at Netflix. Overseeing all programming
for the streaming giant, she will report directly to co-CEO Ted Sarandos. Previously, as
VP of Local Language Originals, she brought shows like Sacred Games, Never Have I Ever, and Indian Matchmaking to Netflix. Earlier, she was the president of Universal Television at NBC and was Miss India Universe in the early 1990s. 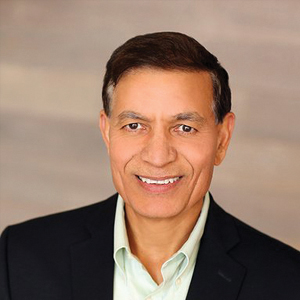 Jay Chaudhry, CEO of cybersecurity firm Zscalar, is worth $6.9 billion, making him the richest Indian-American. He’s ranked 85 on the 2020 list of 400 American billionaires put out by Forbes. Six other Indian-Americans are on the list, but there’s a big gap between Chaudhry and Romesh Wadhwani, the next Indian-American. Worth $3.4 billion, Wadhwani, CEO of Symphony Technology Group, is ranked 238. 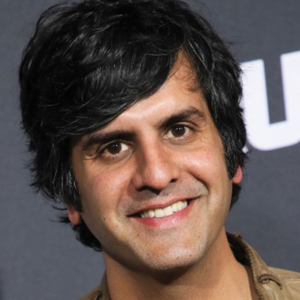 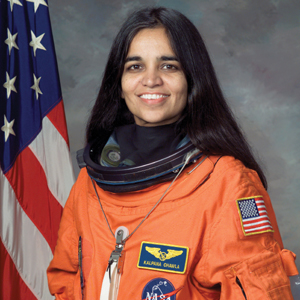 Kalpana Chawla, who died along with her six crewmates when their space shuttle Columbia exploded in 2003, is being brought back to public consciousness. Northrop Grumman named a Cygnus capsule in her memory. Recently the S. S. Kalpana Chawla capsule was placed atop a Northrop Grumman Antares rocket and launched from Virginia. In 1997, Chawla became the first woman of Indian origin to enter space.

INDIAN-AMERICANS AND THE ELECTION 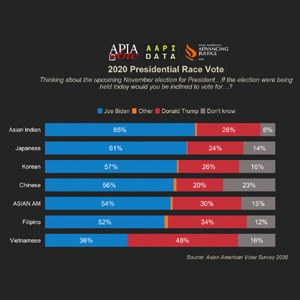 Though only 58 percent of Indian-Americans surveyed said they were more enthusiastic about voting this year than in previous elections, 98 percent (the highest among all Asian American groups) do plan to vote. That’s according to a recent joint report on Asian Americans from AAPI Data, APIAVote, and AAJC. While 34 percent have decided to vote in person on November 3, a slightly lower number (32 percent) are voting by mail. Absentee votes and early votes will account for 39 percent. Indian-Americans favor Democrats—and not just in the presidential election. For the House of Representatives, if the election were held now, 63 percent would vote for Democrats. For the Senate, it’s 54 percent. While only 28 percent of Indian-Americans support Donald Trump, 65 percent will vote for Joe Biden today, according to the survey. Biden’s favorability ratings are 45 percent (somewhat favorable) and 27 percent (very favorable). As for Trump, 53 percent have a very unfavorable opinion of him. 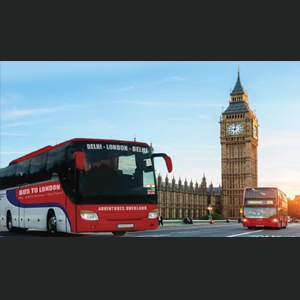 The travel industry has suffered a big blow, and full recovery could take years. On the other hand, once the coronavirus threat recedes and employment rises, the pent-up demand for travel could overwhelm existing capacity. Planes may be packed, hotels could be full, and popular destinations will be crowded. But tourists seeking novelty won’t lack options. Tushar Agarwal and Sanjay Madan have an initiative for folks who want to avoid planes, trains, and cars. For a hefty $20,000, their Adventures Overland tour company will take them on a 70-day bus trip. It’s no ordinary journey. Only 20 passengers will be on this luxury bus as it makes its way from Delhi to London (or vice versa), with stops to see pandas and pagodas, the Great Wall of China, places in nations like Uzbekistan and Kazakhstan, and attractions in Russia and Europe.

The bus will pass through 18 countries and cover almost 12,500 miles. It’s been called the world’s longest bus journey, but it’s hardly new. Such buses were plying in the ’50s, ’60s and even ’70s, providing an adventurous alternative to air travel, which was expensive. This was the era before mass travel. Operators like Indiaman and Garrow-Fisher Tours took passengers from London to Calcutta, which was a longer route than the London-Delhi route. The Hippie Trail, as it was sometimes called, attracted over thirty operators in that era, bringing many Westerners to India and other places in Asia. One big difference between then and now: you’re bound to find a more diverse group of travelers today, including affluent Indians who won’t think twice about plunking down 20 grand for a bus journey that will take them all the way to Europe. 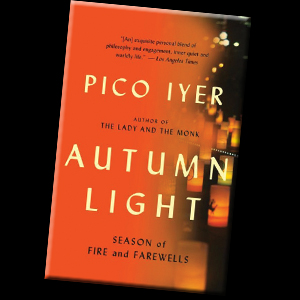 Autumn Light: Japan’s Season of Fire and Farewells (Knopf) – by Pico Iyer. The paperback edition of this book from last year was released in 2020. Iyer’s writing is meditative and luminous, evoking the melancholic splendor of Japan in his favorite season. He writes about his wife, Hiroko, her grown children, and her now deceased parents, bringing into sharper focus not only his family but also the country he has called his second home for over 25 years. The zen-like vignettes, dwelling on life in late middle age, take readers to Nara, where they live, and nearby Kyoto, home to 1600Buddhist temples and 400 Shinto shrines. Iyer writes about his aging ping-pong buddies, Ozu films, changing colors and lives, his daughter (who calls him Pi-sama), and the Dalai Lama. Hiroko, used to her strange, wandering husband’s long absences, asks if anything really happens in his book. As he replies, “what happens is not so visible. It’s hard to see which parts are important until years later. Or maybe never.” 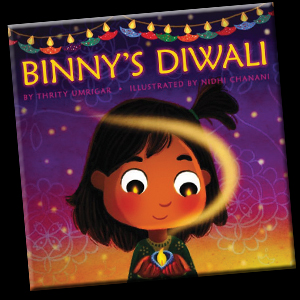 Binny’s Diwali (Scholastic Press) – by Thrity Umrigar and Nidhi Chanani (illustrator). An award-winning novelist has teamed with an award-winning graphic artist to make a lovely gift for preschoolers. Binny, an Indian girl looking forward to Diwali, is nervous but delighted when their teacher, Mr. Boomer, asks her to talk about it in class. Of course, the story Binny shares would be incomplete without the colorful festival depictions by Chanani, who won acclaim and a South Asia Book Award for Pashmina, a graphic novel. Binny doesn’t leave out the important stuff: “Everybody went shopping for Diwali—kids got new clothes and toys, parents bought each other jewelry, and friends exchanged gift baskets filled with cakes and sweets and nuts.” Chanani, picked by Obama as a “champion of change” in 2012, dropped out of art school after a year, but then she began doing one illustration a day—an exercise that she continued for three years, honing her skill. Gurinder Chadha is adapting Pashmina for an animated film on Netflix. 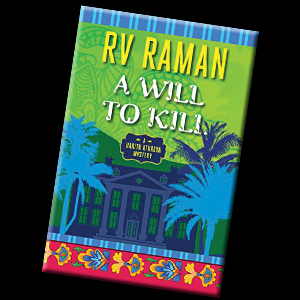 A Will to Kill (Agora Books) – by R. V. Raman. For Agatha Christie fans, here’s a whodunit that takes them to the cool Nilgiris of southern India. The setting may remind them of Christie’s England. Bhaskar Fernandez’s relatives are circling like vultures, waiting for the old man to die in his Greybrooke Manor, which has already seen a slew of murders. To protect himself at his party, the wheelchair-bound Fernandez makes out two wills. Viewers of the hit movie Knives Out may think they already know the outcome. “However, there is a sudden landslide in the area, rendering the guests immobile and a death occurs, leaving everyone confused and scared, including Harish Athreya, a detective who was invited to be a part of the motley crowd,” notes The Telegraph (India). Raman, who teaches business strategy at an Indian Institute of Management, is not a debut novelist. His successful corporate thrillers, all set in India, are called Fraudster, Insider, Saboteur, and Conspirator. Now he has started a mystery series. 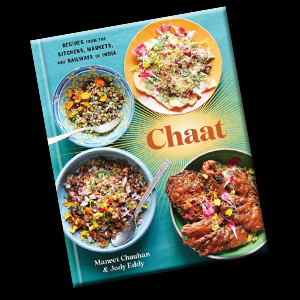 Chaat: Recipes from the Kitchens, Markets, and Railways of India (Clarkson Potter) – by Maneet Chauhan and Jody Eddy. Foodies picking up this book will relish a sumptuous visual feast and cherish a bunch of mouth-watering chaat recipes from Chauhan, who won a James Beard Award and was a Chopped judge. She owns four restaurants in the Nashville area. A native of Ranchi, Chauhan grew up in a state “famed for its malpau, crispy spiced pancakes drenched in sugar syrup.” Sticking to the literal translation of chaat (“to lick”), Chauhan covers the length and breadth of India for a recipe collection that seems inseparable from Indian trains, on which she has ridden extensively, enjoying the food of every region. It inspired her to become a chef. While  “everyone else wanted to see the Taj Mahal,”
Chauhan, as a child, was more interested in the  delicious food she got to eat. Especially chaat, which she calls “a mighty snack that tells India’s culinary story more adeptly than any other food.”