Briefs/ Are Asians Abandoning the GOP?/ Indian Doctors in the Age of Covid/ Book Matters. 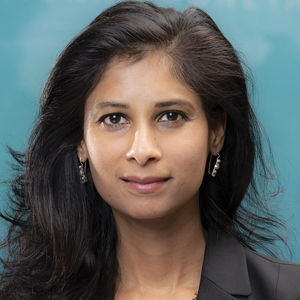 Gita Gopinath, who was scheduled to return to Harvard after being chief economist at the International Monetary Fund (IMF), is now staying for a longer stint, following her promotion to the number two position at the IMF. As the first deputy managing director, Gopinath will address the macroeconomic challenges of nations, and she’ll report to Kristalina Georgieva, the chair and managing director of the IMF since 2019. 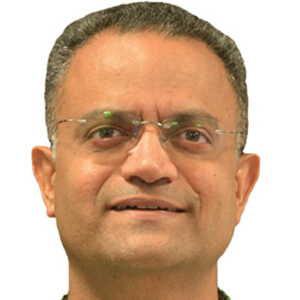 Pankaj Kulshreshtha, founder and CEO of Scienaptic Systems, is a winner of the 2022 BIG Innovation Awards. Known for its AI-enabled credit decisioning, the platform tackles outdated underwriting methods that can leave out millions of borrowers. Financial institutions with assets over $100 billion can use the platform to get faster and more accurate decisions. The Business Intelligence Group presents the awards. 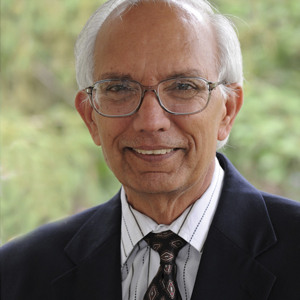 Rattan Lal, who won the 2020 World Food Prize and the 2019 Japan Prize, has been appointed by President Biden to the Board for International Food and Agricultural Development (BIFAD). The soil scientist from Ohio State University will advise USAID on education and agricultural policies affecting developing nations. Rattan is known for promoting food security and climate-resilient agriculture with his soil-centric approach. 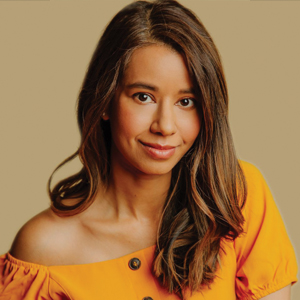 Sujata Day made a film called Definition Please, now available on Netflix. Yes, there’s a Spelling Bee connection, though the story is really about a former champ trying to reconcile with her brother when he returns to help with their mother’s care. Another Netflix film, involving a struggling writer and her sick father, is Agam Darshi’s Donkeyhead. Both were released by ARRAY, which promotes underrepresented filmmakers. 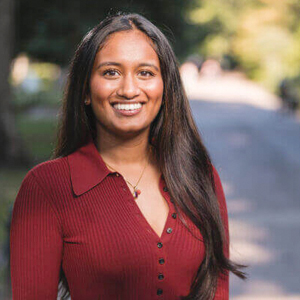 Pooja Ika has drawn attention for starting a Medicare Advantage Health plan that’s an all-female initiative. The Babson graduate is the founder and CEO of Boston-based eternalHealth, which raised over $20 million in funding over the past six months. It provides quality medical care to residents of Massachusetts. The out-of-pocket costs are low, the process is transparent, and there’s no loss of priority or expertise. 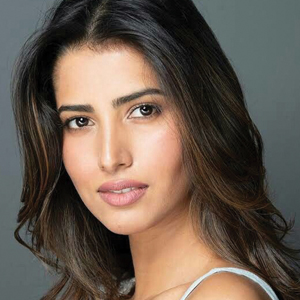 Manasvi, formerly known as Manasvi Mamgai, will be familiar to some as the Republican Hindu Coalition’s ambassador during the 2016 U.S. presidential election. Now based in Los Angeles, the former Miss India (2010) is an actress and a model. She was in the news for winning prizes totaling almost $50,000 on The Price Is Right. Considered America’s longest-running television game show, it debuted on CBS in 1972. 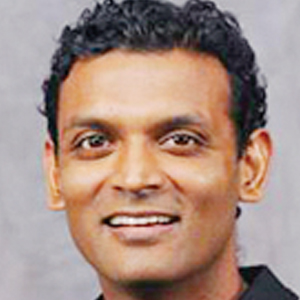 Santosh Srinivas Vempala, a professor of computer science at Georgia Tech, is one of the two Indian-American Fellows of the American Mathematical Society for 2022. The other honoree is Samir Dasgupta, a math professor at Duke University. Vempala focuses on algorithms, randomness, geometry and computing-for-good. Dasgupta’s interests are algebraic number theory, special values of L functions, and units in number fields. 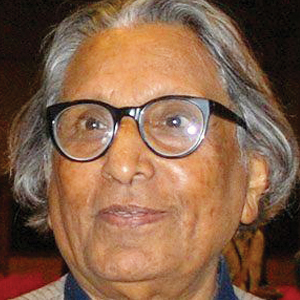 Balkrishna Doshi, aged 94, won the Pritzker Architecture Prize when he was 90, becoming the first Indian to win this prestigious honor. Now he has received the 2022 Royal Gold Medal for Architecture from the Royal Institute of British Architects. Doshi is known for combining modernist design styles with traditional Indian aesthetics, and his works include IIM-Bangalore, Amdavad ni Gufa and Aranya Low Cost Housing.

ARE ASIANS ABANDONING THE GOP? 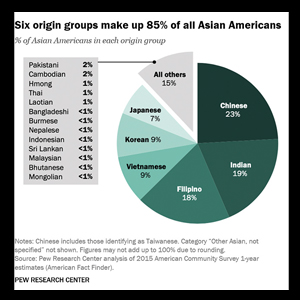 Talk of a mass exodus may seem overblown, but it’s true that Asian Americans get the jitters when they look at today’s Republican Party, which is destabilizing the nation. And it’s going to be uglier as we approach the midterms this year. The drawbacks of a two-party system are clear, now that one party is increasingly reactionary. A consequence of the great sorting, as the GOP becomes whiter, is that non-whites seem to be shunning it in rising numbers. That’s certainly true of Asian Americans. In the Virginia gubernatorial election, for instance, although the Republican candidate won, 67 percent of Asian American voters supported the Democratic candidate. The percentages were even higher in the Boston and New York mayoral races.

INDIAN DOCTORS IN THE AGE OF COVID 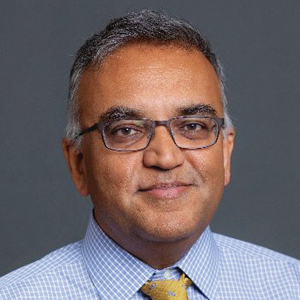 For years, CNN’s Dr. Sanjay Gupta was the most visible Indian-American doctor on television. But there’s serious competition in the age of Covid, and viewers have turned to many other medical experts for guidance, science-based facts, and reassurance. While Dr. Anthony Fauci and Dr. Rochelle Walensky are household names, so is Dr. Ashish Jha, one could argue. Shortly after the pandemic became a reality, forcing people to stay home, Jha began appearing on television in their living rooms. Some will be surprised to learn that he’s not a virologist or vaccinologist—or even an immunologist. “But he is a public health expert and a practicing internist, which means he has years of experience explaining complicated and often incomplete information to people who neither know nor care about the correct pronunciation of ‘adenovirus,’” notes Damian Gardein STAT.

The 50-year-old Jha is accessible and, like other credible communicators, he’s able to provide the assurance people seek in anxious times. He’s the dean of the Brown University School of Public Health. A native of Bihar, he grew up in India, Canada and the U.S. After graduating from Columbia, he received his MD and MPH from Harvard. Of course, he’s not the only Indian-American medical expert to come on television these days. Others include Dr. Vivek Murthy, Dr. Kavita Patel, Dr. Celine Gounder, Dr. Seema Yasmin, Dr. Alok Patel, Dr. Vin Gupta and a few others. Then there are the writer doctors who, in opinion columns and longer articles, educate and advise readers on issues related to the coronavirus and beyond. They include Dr. Atul Gawande, Dr. Dhruv Khullar, Dr. Siddhartha Mukherjee and Dr. Sandeep Jauhar. 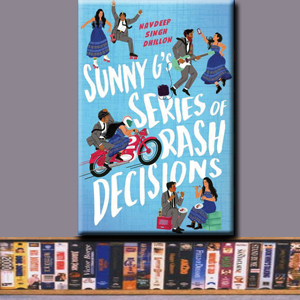 Sunny G’s Series of Rash Decisions (Penguin Young Readers), by Navdeep Singh Dhillon. In this YA novel set in California, readers encounter the cultures of two underrepresented communities. Ditching a prom, where they’re the only students of color, Sunny G, a Sikh teen, and Mindii, a Hmong girl, undertake a “series of rash decisions” at Mindii’s instigation They take off on her motorbike and make stops at her family bakery and a video store (do they still exist?) that belongs to Sunny G’s family. On this journey, learning about their heritage is as important as learning about each other. One important stop is at a solemn gathering to mark the first death anniversary of Sunny G’s brother. New York-based Dhillon, a former linguist in the U.S. Navy, has lived in Europe, Africa and Asia as well. “Before I committed, I spent hours researching turban styles, watching Sikh TikTok stars, Punjabi singers, and vloggers on YouTube,” notes Sunny G, referring to an adolescent ritual familiar to observant Sikhs. 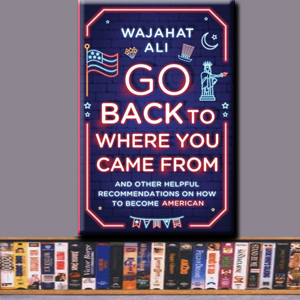 Go Back to Where You Came From (W.W. Norton), by Wajahat Ali. The title makes this book sound grim, but the subtitle (And Other Helpful Recommendations on How to Become American) makes the author’s style clear. Above all, it’s a searingly honest look at life from a Muslim American’s perspective. Readers of Ali’s columns in outlets like The New York Times and The Daily Beast will be familiar with his insights and humor. Another trait, which he shares with Ayad Akhtar, a fellow Pakistani-American author, is the ability to write perceptively about Islamophobia. Ali was in college when 9/11 happened, and even as he was dealing with its fallout, his family experienced a personal tragedy when his parents were incarcerated. Ali, who calls himself a recovering lawyer, has found success as a playwright and essayist. Describing the book as “a candid story of growing up Muslim in America,” the author Laila Lalami says it “reveals the pain of loving a nation that doesn’t always love you back.” 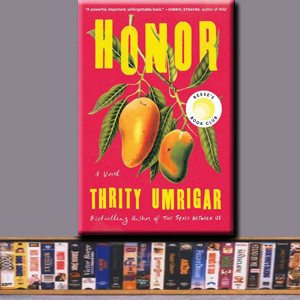 Honor (Algonquin), by Thrity Umrigar. Calling the novel “a graphic parable of contemporary India,” Kirkus says it is “delivered in broad brush strokes.” Publishers Weekly, on the other hand, notes that “Umrigar offers readers a broad understanding of the complicated issues at play in contemporary India.” Whatever the case may be, Umrigar’s track record as an astute chronicler of the Indian experience will attract plenty of readers to her ninth novel. They will follow Smita Agarwal to India. Having moved to the U.S. from India with her family at the age 14, Agarwal, a journalist, is not eager to go back. But the reasons for that come later. First comes the story of how Agarwal, substituting for an American colleague in India, takes on an assignment. It involves an unsettling “honor” killing in a village, triggered by an interreligious marriage. “My body did not die the night of the fire,” says the murdered man’s wife. Her survival, triggering “a burning desire for justice,” now has a larger purpose. 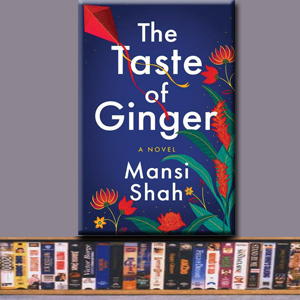 The Taste of Ginger (Lake Union Publishing), by Mansi Shah. Can we successfully blend cultures to suit us, as if they’re parts of a matching outfit? Grappling with identity is not new for Indian-Americans, but the story never gets old because every journey is different. Preeti Desai, a successful lawyer, is more American than Indian and is somewhat disconnected from her more traditional Midwestern family. Two events—the breakup with her white boyfriend and a family crisis—change the trajectory of her journey. An urgent phone call brings her to India, where her brother and family have gathered for a wedding. Being a stranger in the native land of her parents doesn’t mean she’s fully at home in the U.S., as they seem to think. “They wanted to believe that America had accepted their children, and if we didn’t let them have that lie, then they’d be left wondering if their sacrifices had been worth it,” she says. Shah worked as an entertainment lawyer before turning to fiction.​