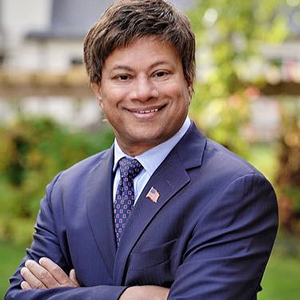 Shri Thanedar, who grew up in India, is the fifth member of the so-called Samosa Caucus in the new House of Representatives. The Belgaum-born Democrat was elected from Michigan’s 13th congressional district. After moving to the U.S. in 1979, Thanedar earned his PhD in polymer chemistry and became a highly successful entrepreneur. The other Indian representatives are Jayapal, Khanna, Krishnamoorthi, and Bera. 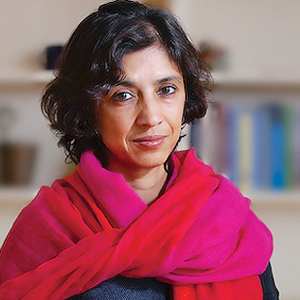 Rohini Pande, an economics professor and director of Yale’s Economic Growth Center (EGC), won the 2022 Infosys Prize in the social sciences. Pande’s research focuses on governance and accountability, the environment, women’s empowerment, and the role of credit in the lives of the poor. Munshi Kaivan, another Yale economist, won this prize in 2016. Now worth $100,000 in rupees, the award includes a gold medallion. 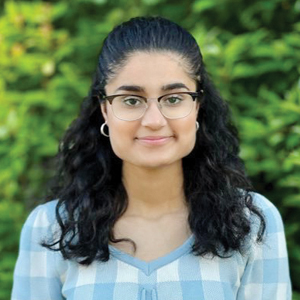 Alishba Imran is on Teen Vogue’s annual 21 Under 21 list, along with Shiva Rajbhandari and Sridevi Krothapalli. Alishba, now at UC Berkeley, focuses on machine learning, robotics, and blockchain. Shiva is a clean energy, climate, and voting rights activist. Sridevi, studying to be a physicist, was chosen to attend a Next Generation of Women in Physics program hosted by Stanford University and the Kavli Institute. 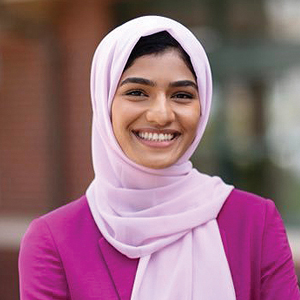 Nabeela Syed, a 23-year-old Democrat from Illinois, flipped a Republican-held district to become the youngest representative in her state’s General Assembly. Born to immigrants from Hyderabad, India, Syed grew up in suburban Chicago and was elected from the 51st district. A graduate of UC Berkeley, where she double majored in political science and business, Syed is an activist and has worked for nonprofits. 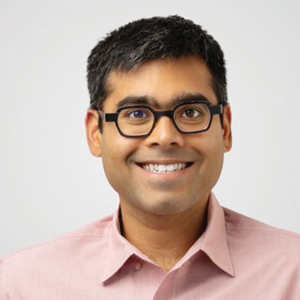 Ankit Gupta founded Bicycle Health, a telehealth services provider that tackles opioid use disorder. He and Kanav Kariya, president of Jump Crypto, are on Fortune magazine’s 40 Under 40 list for 2022. Gupta, picked in the Health and Bioscience category, has operations in 29 states, and his California-based company has treated over 20,000 patients. There are plans to expand to six more states over the next two quarters. 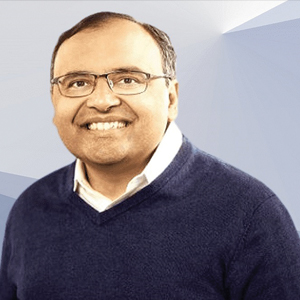 Nihar Malaviya, president and CEO of Penguin Random House’s American division, has become interim CEO of the publishing house. With over 100 imprints that publish a combined total of over 2000 titles annually, it is much bigger than the other four major publishers in the U.S. Malaviya, who earned an MBA from NYU, was promoted after a failed acquisition of Simon & Schuster forced Markus Dohle to step down as the CEO. 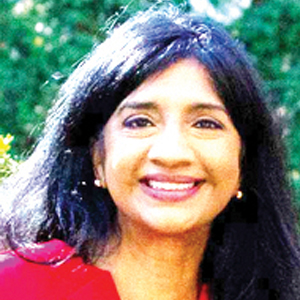 Aruna Miller, who moved to the U.S. at the age of seven, is the new state lieutenant governor of Maryland. She’s the first South Asian American to be elected to this position in any state. A Democrat, she defeated the Republican incumbent. After earning her civil engineering degree, Miller worked for her state’s Department of Transportation for a quarter-century, and then served in the House of Delegates for eight years. 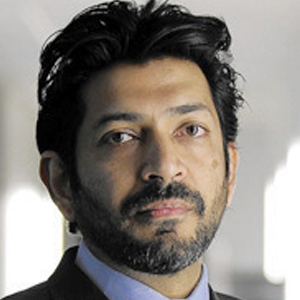 Siddhartha Mukherjee, a New York-based physician who’s also a scientist and a storyteller, has written another book for nonspecialists that’s winning raves. Called The Song of the Cell: An Exploration of Medicine and the New Human, it’s a bestseller. The Emperor of All Maladies: A Biography of Cancer, his first book, won a Pulitzer Prize, and he also wrote a well-praised book titled The Gene: An Intimate History. 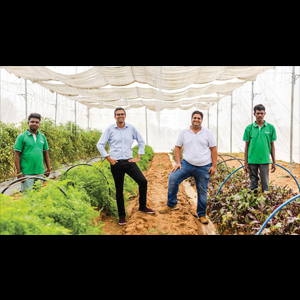 In the face of climate change, how do we make agriculture sustainable while keeping it viable? Kheyti, an Indian startup that won an Earthshot Prize recently, is addressing that challenge. Also known as the Eco Oscars, each prize is worth a million pounds. Along with his team, founder and CEO Kaushik Kappagantulu has come up with a seemingly simple solution. Kheyti created a Greenhouse-in-a-Box, which can be used by small-hold farmers to grow crops safely. Besides protecting the plants from inclement weather, pests can be kept out. But that’s not all. Plants grown in this enclosure require much less water (by 90 percent, according to Kheyti) and the yield can be seven times higher. Their modular greenhouse, which includes a drip system and end-to-end support, can be installed for half the cost of a regular greenhouse. About 1500 farmers are in the program, and Kheyti plans to ramp up the enrollment to 50,000 by 2027.

Of course, many other organizations around the world are doing their bit to tackle the biggest crisis of our time. In fact, the years 2021-2030 have been dubbed the Decade on Ecosystem Restoration by the United Nations. In December last year, it recognized an Indian government initiative to rejuvenate the Ganges as one of the 10 pioneering efforts to revive the natural world. The recently formed Ecological Restoration Alliance India (ERA) is also worth mentioning. As The New Yorker points out, its “long-term goal is to fundamentally change how India’s citizens, industries, and governments interact with the environment.” Rewilding by creating “tiny forests” is an example of their approach. 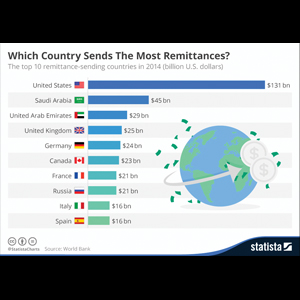 Rising migration, a favorable exchange rate, and Covid relief were factors that boosted the flow of money to India last year. Following a 12-percent increase from 2021, according to the World Bank, India became the first country to receive $100 billion in a year. What about China? It was in third place, receiving almost half that amount, while Mexico, which got $60 billion, was in second place. The Philippines and Egypt were also in the top five nations for remittances, but Pakistan, Bangladesh, and Sri Lanka saw a decline last year (Nepal bucked that with a small increase of 4 percent). Although it’s no surprise that India is first—Indian migrants, after all, form the largest diaspora (over 18 million)—there were trends that facilitated the sharp rise. Outbound migration, after a drop during the pandemic, rebounded last year. Canada, which increased its intake of Indian migrants, is a good example.

“Remittances to India were enhanced by wage hikes and a strong labor market in the United States and other OECD countries,” the report notes. The strong U.S. dollar helped, as did the pandemic assistance provided to employees and businesses. Foreign remittances make up 3 percent of India’s GDP. The biggest source country, accounting for 23 percent of the money going to India, is the U.S., where there are close to five million Indian-Americans. Earlier, the U.A.E. was the top source country for India. The total remittances to all nations reached $630 billion in 2022. Because of inflation and slowing growth, the report adds, 2023 will “stand as a test for the resilience of remittances from white-collar South Asian migrants in high-income countries.” 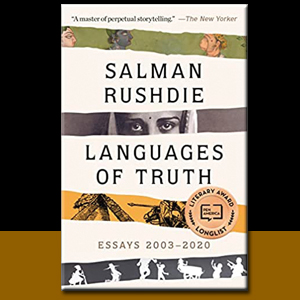 Languages of Truth: Essays 2003-2020 (Random House), by Salman Rushdie. In his third nonfiction collection, out in paperback, we learn how Rushdie, who’d been seriously ill only twice before the pandemic, got Covid in early 2020. “Since then, I’ve come to understand exactly how lucky I was,” he writes. It’s haunting to read that now, given the horrific assault he endured in 2022.But he’s in good spirits, according to media reports, and his recovery is going well. In this book, divided into four sections, Rushdie makes a passionate case for magic realism, showing how it’s a hallmark of not only the grand epics, both in the East and West, but also of some well-known works of contemporary literature. He pays tribute to Philip Roth and Christopher Hitchens, among other authors, and shares his appreciation of the artists Amrita Sher-Gil and Bhupen Khakhar. Also included are his PEN lectures and a commencement address at Emory. “Speak your mind,” he told the new graduates. “Don’t censor yourselves. Use your imagination.” 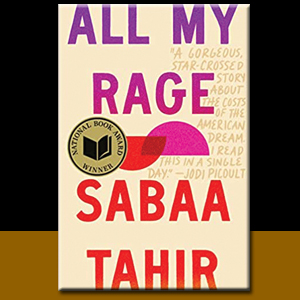 All My Rage (Razorbill), by Sabaa Tahir. For this novel set in California, Tahir won the 2022 National Book Award for Young People’s Literature. Unlike her fantasy fiction, this work draws on her own background. After a tragedy in Pakistan, Misbah and Toufiq move to the U.S. and settle in the Mojave Desert, where they open a motel. Their son, Salahudin (Sal), has to step in when the motel starts to fail. Misbah and Toufiq, who have personal issues, are not able to cope. Like Sal, Noor grew up in Juniper, although she wants to escape to college, leaving her uncle and his shop behind. But things are complicated because Noor and Sal are more than just friends. Tahir “turns her considerable talent and skill to the real—but no less terrifying—monsters that dwell in the human heart,” notes YA author Nicola Yoon. Tahir grew up in the Mojave Desert, where her parents owned an 18-room motel. Her fantasy series is called An Ember in the Ashes. 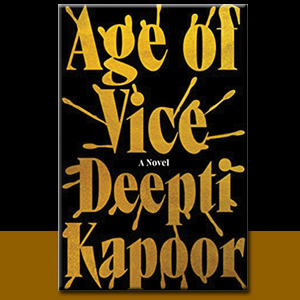 Age of Vice (Riverhead Books), by Deepti Kapoor. For her second novel, Kapoor, a former Indian journalist now living in Portugal, has returned to Delhi. Vibrant yet menacing, the city is irresistible to writers of fast-paced thrillers. As in Bad Character, Kapoor’s action-packed debut, India’s capital plays a lead role in the new novel, though the countryside also matters. Five members of the filthy rich Wadia family get wiped out when an expensive car, racing through Delhi in the middle of the night, hits the curb and crashes. Welcome to a world of betrayal, greed, sensuality, thuggery, revenge, etc. Three people are the center of a novel that is, as the author Rumaan Alam puts it, “garlanded with Shakespearean flourishes—star-crossed lovers, secret identities, complicated conspiracies—exploring timeless questions of family, loyalty, and fate.” There’s Ajay, a lower class striver who is a driver. Sunny is the upper class heir and playboy. And then we have Neda, a middle class journalist who’s torn between two worlds and two visions. 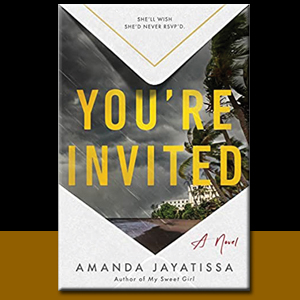 You’re invited (Berkley), by Amanda Jayatissa. Sri Lanka is a small nation, but its writers have made a big impression in the English-speaking world. Two of them won the Booker Prize, and many others have gained recognition. They include Ru Freeman, Shyam Selvadurai, Anuk Arudpragasam, Nayomi Munaweera, S. J. Sindu, and Amanda Jayatissa. Then there is V. V. Ganeshananthan, whose Brotherless Night (Random House) is set in the early years of the island nation’s civil war. At the center is Sashi, a 16-year-old Tamil girl and aspiring doctor who faces difficult choices. It “forces the reader to discard a binary description of the world in favor of a more complex, human one,” notes BookPage. In Jayatissa’s new thriller, Amaya in invited to a wedding by Kaavi, a friend who’s been ignoring her. The reason soon becomes clear. Kaavi is about to marry Amaya’s ex-boyfriend.