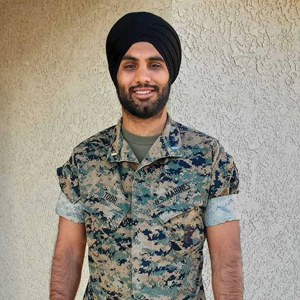 1st Lt. Sukhbir Toor is an officer with the 3rd Battalion, 11th Marines. In 2021, he won a big concession from the Marines Corps, which is known for its strict dress code. As an observant Sikh, the artillery officer is now allowed to wear a turban, although not when he’s deployed in a combat zone. Toor still hopes to change that. Lt. Col. Kamal Kalsi of the U.S. Army was the first Sikh officer to get permission to wear a turban. 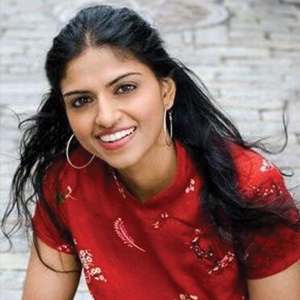 Saru Jayaraman has long argued that there’s a wage shortage rather than a labor shortage in the U.S. An alum of Yale Law School, she is president and cofounder of One Fair Wage (OFW). And at UC Berkeley, she is director of the Food Labor Research Center. She cofounded ROC United to help restaurant workers who were affected by 9/11. Her latest book, published in 2021, is titled One Fair Wage: Ending Subminimum Pay in America. 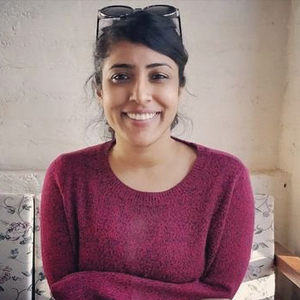 Rintu Thomas and Sushmit Ghosh made history when Writing with Fire, which they co-directed, became the first film from India to win an Oscar nomination for Best Documentary Feature. The film, which took five years to make, is about how Khabar Lahariya, a community newspaper run by Dalit women in multiple dialects, made the transition from print to digital. The acclaimed film has already won several awards. 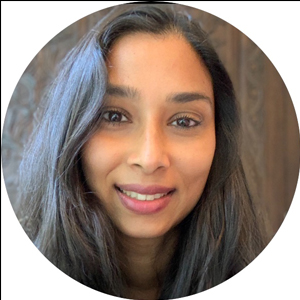 Maxine Henderson, born to Indian immigrants in Canada, has come out with a carbonated beverage that will appeal to fans of nimbu pani. But her limeade, dubbed Bollygood, comes with a twist. She uses pink Himalayan salt, less sugar, herbs and spices to create flavors like Lemon Ginger Mint and Lime Basil Cumin. An engineer by training, she is married to a former NBA player who owns Henderson Spirits Group. 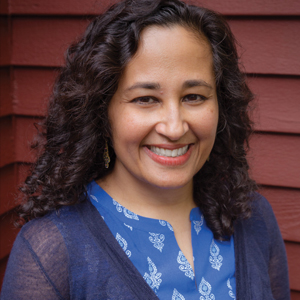 Rajani LaRocca, a Harvard-trained primary care physician in Boston, is also an author of children’s books. Her Red, White, and Whole is a 2022 Newbery Honor Book. Told entirely in verse, it’s about an Indian-American girl whose family is affected when her mother is diagnosed with leukemia. LaRocca’s other books include Where Three Oceans Meet and Midsummer’s Mayhem, and her newest one is called I’ll Go and Come Back. 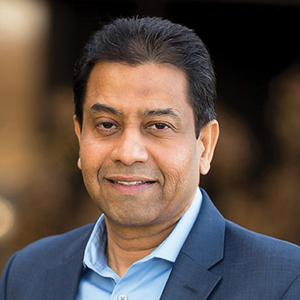 Shankar Musunuri, cofounder and CEO of Ocugen, is serious about bringing Covaxin, India’s Covid-19 vaccine, to the U.S. He’s collaborating with the manufacturer Bharat Biotech, and they’re seeking FDA approval. The biggest advantage is that it can be stored at room temperature for three months, making distribution easier. Musunuri, who worked at Pfizer for 15 years, has a PhD in pharmaceutical sciences and an MBA. 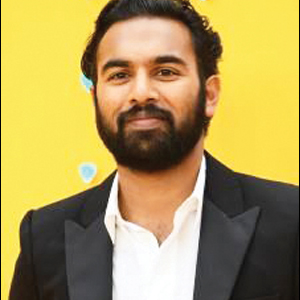 Himesh Patel, like Dev Patel, is a British-born actor who is making inroads in the U.S. In the hit HBO series Station Eleven, based on a bestselling novel, he plays a character named Jeevan Chaudhary, who takes care of a girl after a flu pandemic causes devastation. Patel, whose parents ran a newsagent’s shop in Britain, also appeared in the Netflix film Don’t Look Up. He got his break on EastEnders, a British soap opera. 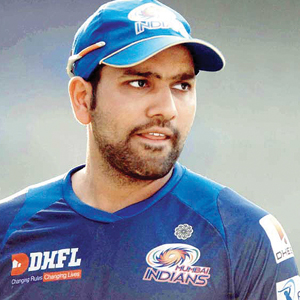 Rohit Sharma took over as India’s white-ball cricket skipper from Virat Kohli for limited-over matches (T20 and ODI). He’s also the new red-ball vice captain for the longer format (Test cricket). Kohli, at least for now, remains the Test captain. The 35-year-old Sharma, a top-order batsman and a right-arm spin bowler, made his debut for India in 2007. Sharma won the 2020 Khel Ratna Award, India’s highest honor for sports. 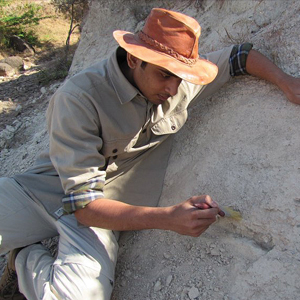 Many people will be surprised to learn that whales originated in India. Not only whales. The subcontinent has also produced, as Advait Jukar told the BBC, “some of the largest rhinos and elephants that have ever existed, vast beds of dinosaur eggs, and strange horned reptiles from before the age of dinosaurs.” Jukar is a vertebrate paleontologist at Yale and a research associate in the paleobiology department at Washington’s Smithsonian Institution. But much of this rich heritage remains buried and unknown because explorations lag behind in India. Over the last few years, researchers in Meghalaya have uncovered fossil bone fragments of long-necked dinosaurs. These sauropods, which roamed in the region a hundred million years ago, were probably some of the biggest animals that ever lived.

Other Indian states where similar dinosaur fossil bone fragments have been found: Maharashtra, Tamil Nadu, Gujarat and Madhya Pradesh. Although much of this buried treasure remains unexamined, the first dinosaur fossil in India was discovered over two centuries ago. In 1828, Captain William Henry Sleeman of the East India Company came across two fossil fragments that were later found to be from a Titanosaurus. In a 2003 expedition led by Ashok Sahni, paleontologists uncovered the fossil bones of a carnivorous dinosaur that could have been about 30 feet long. Some museums in India have dinosaur fossil exhibits, and the most notable display is at the Dinosaur Fossil Park and Museum in Gujarat. Located in the village of Raiyoli, about 60 miles from Ahmedabad, the museum displays the fossil remains of 13 different species. Opened in 2019, this is the only dinosaur museum in India that also has a park next to it. 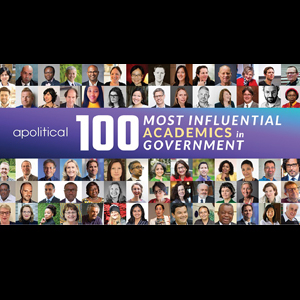 Eight Indian-American scholars, including two women, are included in Apolitical’s “100 Most Influential Academics in Government.” So is Pratap Bhanu Mehta, a leading Indian political scientist and commentator who is currently a distinguished visiting professor at Princeton, his alma mater. U.K.-based Apolitical is said to be the world’s “first global platform for government that helps public servants find the ideas, experts and partners they need to solve the hardest challenges facing our societies.” Harvard economist Gita Gopinath, perhaps the most notable Indian-American in this group, is serving as the IMF’s first deputy managing director, which is the number two position. Pradeep Khosla, chancellor, University of California San Diego, focuses on internet-enabled collaborative design and his research projects have resulted in three books and over 350 journal contributions. Nitin Nohria, a professor who served as the dean of Harvard Business School for a decade, has co-authored or co-edited 16 books.

Rohini Pande is director of the Economic Growth Center at Yale. She focuses on public policy that advances economic justice and has received the Carolyn Bell Shaw Award for promoting gender equity. Political scientist Devesh Kapur is director of Asia Programs at The Johns Hopkins University School of Advanced International Studies. He works on making the state more accountable to its citizens. Karthik Muralidharan, an economist at the University of California San Diego, focuses on development, public and labor economics. Anup Malani, a professor at the University of Chicago Law, was chosen in the “Recovery from Covid-19” category, along with Manoj Mohanan, a professor at Duke University’s Sanford School of Public Policy. 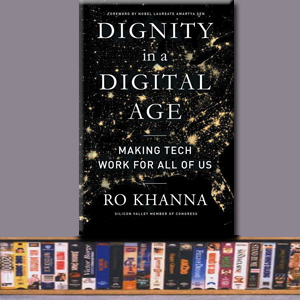 Dignity in a Digital Age (Simon & Schuster), by Ro Khanna. You might think that Congressman Khanna, who represents Silicon Valley, grew up in California. But Khanna graduated from a high school in Bucks County, PA, where his parents still live. While he did attend the University of Chicago and Yale Law School, and eventually moved to Silicon Valley, which he says is “arguably the most economically powerful place in the world,” Khanna never forgot his roots. His maternal grandfather, who was imprisoned during the Indian independence movement, was another example. In this book, Khanna lays out his ideas for healing the nation’s divisions by bridging the digital divisions. Rather than letting people seek work opportunities elsewhere, he says it’s smarter to bring the Silicon Valley culture to places like the Appalachia (“Silicon Holler”). “We need a development strategy that fosters a nucleus of tech jobs with myriad applications for different industries and local entrepreneurs in thousands of rural and underrepresented communities across our nation,” Khanna points out. 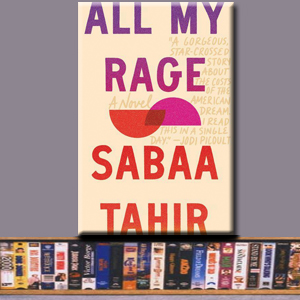 All My Rage (Razorbill), by Sabaa Tahir. This bestselling Pakistani-American author, known for fantasy fiction, draws on her own background for a contemporary YA novel set in California. After a tragedy in Pakistan, Misbah and Toufiq settle in the Mojave Desert, where they open a motel. Their son, Salahudin (Sal), has to step in when the motel starts to fail. Misbah and Toufiq, who have personal issues, are not able to cope. Like Sal, Noor grew up in Juniper, although she wants to escape to college, leaving her uncle and his shop behind. But things are complicated because Noor and Sal are more than just friends. Tahir “turns her considerable talent and skill to the real—but no less terrifying—monsters that dwell in the human heart,” notes YA author Nicola Yoon. Tahir grew up in the Mojave Desert, where her parents owned an 18-room motel. Her four-part fantasy series is called An Ember in the Ashes. 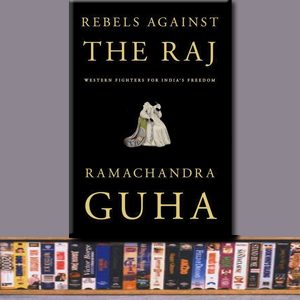 Rebels Against the Raj (Knopf), by Ramachandra Guha. The well-known historian picked seven brave Westerners who risked ostracism and worse to participate in India’s freedom struggle. Their decision to go native for a just cause earned them the lasting affection of Indians. In fact, they became Indians. They were Annie Besant, Mira Behn, Samuel Stokes, B.G. Horniman, Sarla Behn, Philip Spratt and R.R. Keithahn. Five of them were from Britain, which ruled India, and the other two came from America. Their time in India spanned just over 90 years, with the first rebel arriving in 1893 and the last rebel dying in India in 1984. What drew Guha to this project now? “The lives and doings of these individuals constitute a morality tale for the world we currently live in,” he writes. “This is a world governed by paranoia and nationalist xenophobia, with the rise of jingoism in country after country, and a corresponding contempt for ideas and individuals that emanate from outside the borders of one’s nation.” 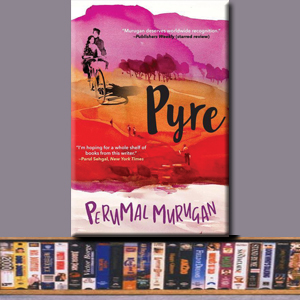 Pyre (Grove Press), by Perumal Murugan. Translated by Aniruddhan Vasudevan. Murugan, who writes in Tamil, burst upon the literary scene when his One Part Woman generated controversy in his home state. His novels, whether they’re innovative like The Story of a Goat or realist like Pyre, generate wide interest, and he’s one of the most celebrated fiction writers in India today. The reader is back in rural India, where Kumaresan, a soda bottle entrepreneur, marries Saroja, who belongs to another caste. But this is hardly New India. Kumaresan has defied his family and the traditions of his remote, sunbaked village—and the couple will pay a price. He starts drinking, while Saroja is increasingly isolated. The setting matches the characters. “To classify Perumal Murugan’s books as vattaara ilakkiyam or sub-regional literature would be tragic, because he succeeds in universalising Kongu Nadu to such a degree that place and person fall away and all that remains is a hard and glittering gem of a story,” according to The Hindu.