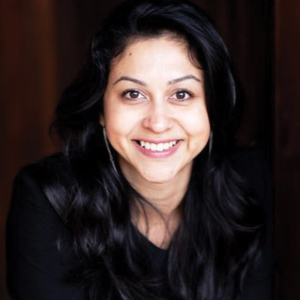 Neha Narkhede, who grew up in Pune and did her graduate studies in computer science at Georgia Tech, is a winner of the 2022 Technology Entrepreneurship Abie Award. Now 37, she cofounded Confluent, a streaming data technology company, and helped develop Apache Kafka, the widely used open source messaging system. Forbes ranked her number 57 on its 2022 list of America’s Richest Self-Made Women. 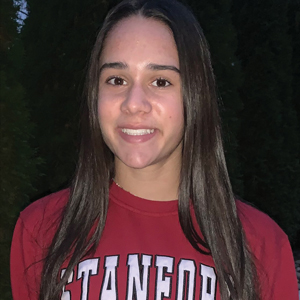 Mia Bhuta, whose father is an Indian immigrant, has become the first Indian- American to play soccer for the U.S. team in any FIFA World Cup game. Interestingly, she made her debut at the FIFA U-17 Women’s World Cup in India. Mia scored the final goal for the U.S. in its 8-0 victory over India. The Pennsylvania teen will begin her undergraduate studies at Stanford, where she will play soccer for the university team. 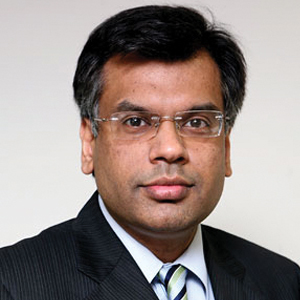 Vivek Lall, a defense expert and the CEO of General Atomics, received a Lifetime Achievement Award from the AmeriCorps, with a citation signed by President Biden. General Atomics, which specializes in nuclear technology, has developed state-of-theart UAVs like the Predator, Reaper, and Guardian drones. Lall, who has a PhD in aerospace engineering, has also held top positions at Lockheed Martin, Boeing, and Reliance. 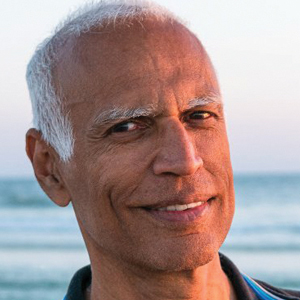 Manil Suri is known for The Death of Vishnu and the other two novels in his trilogy, but his new work is nonfiction. In The Big Bang of Numbers: How to Build the Universe Using Only Math (W.W. Norton), he takes readers on an inventive exploration of the cosmos with the help of mathematical concepts. And, yes, the book is for the general reader. Suri is a distinguished math professor at the University of Maryland in Baltimore. 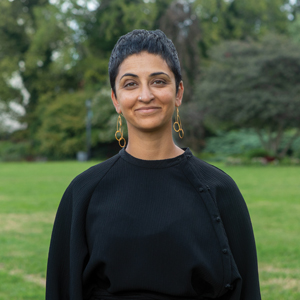 Priti Krishtel is one of this year’s 25 recipients of the McArthur Fellowship. The health justice attorney, who drew attention to inequities in the medical patent system, gets $800,000 with no strings attached. Her work shows how a less commercial and more people-centric approach will make life-saving drugs affordable globally. She cofounded I-MAK (Initiative for Medicines, Access, and Knowledge) to promote equity. 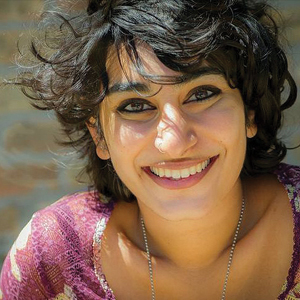 Fatimah Asghar, a South Asian American poet and screenwriter, co-created Brown Girls, an Emmy-nominated webseries. Now she’s also a novelist. When We Were Sisters (One World), the coming-of-age story of a Muslim American, was longlisted for the 2022 National Book Award. Asghar’s parents had fled during the partition of India, but she didn’t get to know them well because they both died by the time she turned five. 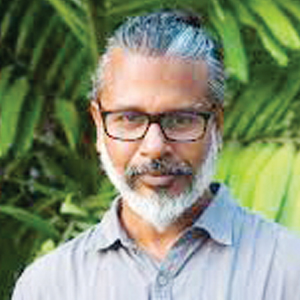 Shehan Karunatilaka of Sri Lanka is the winner of the 2022 Booker Prize for The Seven Moons of Maali Almeida, which will be released by W.W. Norton in the U.S. Two years ago, a different version of the novel was published in India. In this surrealistic satire, a dead war photographer gets seven moons to find out how he died. Karunatilaka’s debut novel in 2011 won the DSC Prize, Commonwealth Prize, and Gratiaen Prize. 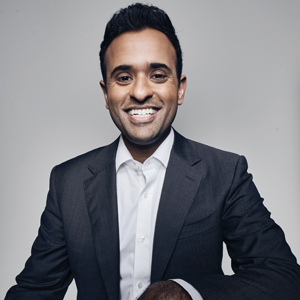 ​Vivek Ramaswamy, an entrepreneur and conservative author, received the 2022 Gentleman of Distinction Award from the Independent Women’s Forum (IWF). A Harvard grad who won the Bowdoin Prize for Natural Sciences, he went to Yale Law School on a Soros Fellowship. He founded Strive Asset Management and Raoivant Sciences, a biopharma company. His books include Nation of Victims and Woke, Inc. 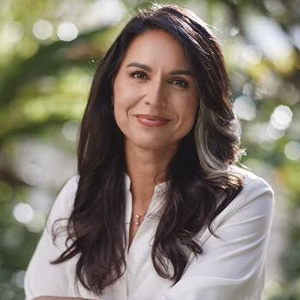 Newt Gingrich, with typical bluster, claimed that Tulsi Gabbard’s recent resignation from the Democratic Party reflected “a huge drift towards the Republican Party.” But Gabbard has always been a maverick, as even Gingrich admitted—and her strong independent streak will be problematic for any party. So far, she hasn’t shown interest in the GOP. If her decision to seek the presidency in 2020 was quixotic, so was her turbulent stint in the Democratic Party, where she often clashed with colleagues. Her explosive, parting tweet about “an elitist cabal of warmongers driven by cowardly wokeness, who divide us by racializing every issue & stoke anti-white racism” was predictable. One wonders why she became a Democrat in the first place.

Many have long questioned not only Gabbard’s credentials as a Democrat, but her religious affiliation to a shadowy, cultist group that some describe as the alt-right of ISKCON. “Tulsi calls herself Hindu, the first Hindu member of Congress, in fact, though the group in which she appears to have grown up does not identify as Hindu,” points out Kerry Howley in New York magazine. According to Gabbard, her “eccentric” Catholic father raised her. As for the Hawaii-based group, it’s called Science of Identity and is led by a hippiesh white man named Chris Rock. “Once again I find my niece’s apparent penchant for parroting extremist toadies such as Tucker Carlson, and vile ‘strongmen’ such as Vladimir Putin, to be problematic and deeply troubling,” says retired English professor Sinavaiana Gabbard in an interview with The Independent (U.K.). “It gives me no pleasure to note that Tulsi’s single governing principle seems to be expedience, which is in effect no principle at all.”

SPACE FRIEND GETS READY FOR TAKEOFF 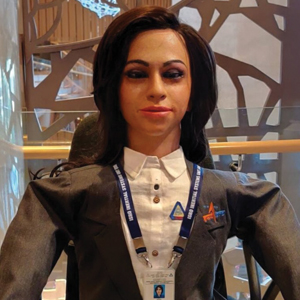 AI and robots have played a key role in space exploration for years. But it was only in 2011 that a humanoid (or human-like robot) first entered space. That year, NASA launched Robonaut 2 (R2) on the last mission of the Discovery space shuttle. For seven years, until it was brought back to the earth on a SpaceX Dragon capsule, R2 remained at the International Space Station and worked alongside the astronauts on board. Now ISRO (Indian Space Research Organisation) is also planning a mission that involves a humanoid, although there’s a difference. Called Vyommitra (Space Friend), it’s a half-humanoid. There are no lower limbs, restricting mobility, but “she” will be able to do switch panel operations and communicate with the ground crew.

First unveiled in 2020, Vyommitra has been integrated with an artificial brain that enables some human-like functions such as reading and speech. Currently undergoing pre-flight ground tests, Vyommitra will be used for the Gaganyaan mission’s first unmanned space flight. Humanoids, by mimicking human actions and even interacting with humans, perform valuable tasks even as they save money and add efficiency. Moreover, their use on preliminary missions will allow scientists to assess—and minimize—the risks astronauts face on space missions. So far, despite ISRO’s success with unmanned missions, there has been no manned space mission from India. Former Air Force pilot Rakesh Sharma, the only Indian citizen to enter space, flew aboard the former Soviet Union’s Soyuz T-11. And that was back in 1984. ISRO’s first manned space flight will have three astronauts on board for a LEO (Low Earth Orbit) journey of 250 miles. 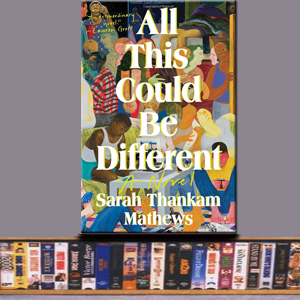 All This Could Be Different (Viking), by Sarah Thankam Mathews. The 2022 National Book Awards will be announced in November, but this widely praised debut novel is already a finalist. We’re in Millennial Land during the Great Recession, and 20-something Sneha, with family and relationship issues, has gotten off to a rocky start in the Midwest, where she has an entry-level corporate job. Her parents have been deported to India, and it’s only a work visa that gives Sneha a precarious foothold in the country. Her deepest connections seem to be with Tig, an African American, and Marina, a white dancer from New Jersey. “As Sneha navigates the hilarious and deadly serious work of being a good friend, lover, daughter, immigrant, adult, queer woman, and worker under late stage capitalism, what emerges is a portrait of a woman determined to live her life to its brim—no matter what,” notes writer C. Pam Zheng. Mathews grew up in Oman and India before moving to the U.S. at the age of 17. 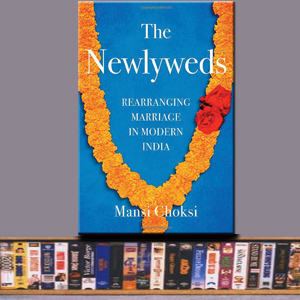 The Newlyweds: Rearranging Marriage in Modern India (Atria Books), by Mansi Choksi. In her nonfiction debut, Choksi follows three young couples in India for six years, tracking their love lives as they navigate the choppy waters of a country that seems perennially stuck between modernity and tradition. Some may be reminded of the 2019 documentary A Suitable Girl. For her book, Choksi, a Dubai-based alumna of Columbia School of Journalism, picked three working class couples who dared to rebel in a conservative society. We have Dawinder and Neetu, two villagers who elope with the help of a group called Love Commandos. Monika and Arif, meanwhile, have to deal with the tribulations of being a Hindu-Muslim couple in an intolerant India. Reshma and Preethi, a lesbian couple, share their own challenges in a book that journalist Anand Gopal calls “a masterpiece of reportage that will change the way you see India—and modern love.” 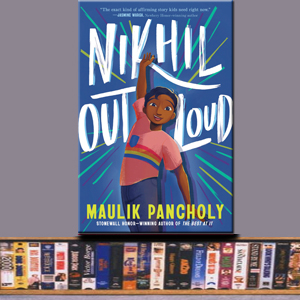 Nikhil Out Loud (Harper Collins), by Maulik Pancholy. The actor and author, who’s also an anti-bullying activist, has come out with his second novel for middle graders. Nikhil Shah is riding high at the age of 13, given his lead role as a voice actor in the popular animated series Raj Reddy in Outer Space. Nikhil thinks he bears an uncanny resemblance to Raj. But his family’s move to a small town in Middle America because of a sick grandparent doesn’t bode well for Nikhil. In a reflection of the ongoing culture wars, some vocal conservative parents at his new school object when Nikhil—who’s openly gay—wins the starring role in a musical. To make things worse, Nikhil’s voice is cracking and his days as a voice actor may be ending soon. According to author Hena Khan, “kids will be cheering for this lovable and relatable protagonist and welcome his voice as he explores family bonds and the meaning of acceptance, and finds courage while facing big changes.” 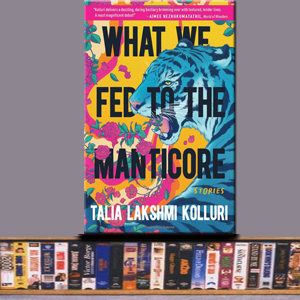 What We Fed to the Manticore: Stories (Tin House Books), by Talia Lakshmi Kolluri. The talking animals in Kolluri’s debut collection may make one think of the Panchatantra or Aesop’s Fables. But Kolluri, who grew up in California and still lives there, has something else in mind. In the face of climate change, and what Amitav Ghosh calls “the great derangement,” she sees an urgent need to engage more deeply with the nonhuman world. In nine stories—with titles like “The Good Donkey” and “The Hunted, the Haunted, the Hungry, the Tame”—she gives voice to animal characters like whales, tigers, vultures, and pigeons. In the first story, a donkey in a war-time zoo is able to do double duty as a zebra because of painted stripes. There is absurdity, but there are also poignant questions about identity and belonging. Kolluri’s work, which has appeared in several journals, is “set to take its rightful place among some of the best environmental fiction in recent memory,” according to The Seattle Times.