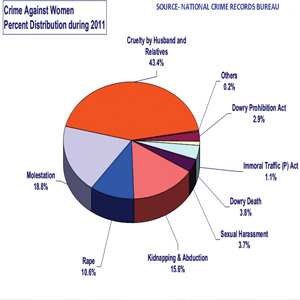 Last month in Delhi, a brutal assault and gang-rape on a private bus that left the victim close to death on a street, where she’d been thrown along with her male friend, shocked the nation and galvanized many people. But while Delhi is notorious for attacks on women, the problem is widespread in India. The statistics are grim. Over a 10-year period, starting in 2001, the incidence of crime against women rose by 59 percent, and the rate went up by almost 40 percent, according to the National Crime Records Bureau in India. Between 2010 and 2011, there was a 7.1 percent jump in recorded crimes against women (many crimes are not reported). Family members, as the pie chart shows, are responsible for a lot of the violence. About 93 percent of the rapes in India are by people the victims know.

A TrustLaw poll of G20 countries last year put India at the bottom, with factors like infanticide, dowry deaths, and child marriage making it the worst place to be a woman. And India, as per a Reuters poll, was considered the fourth most dangerous nation to be a woman. After Delhi, which accounted for 13.3 percent of all crimes against women, Bangalore (5.6 percent) and Hyderabad (5.5 percent) came next. Among states, West Bengal reported the most crimes against women (12.7 percent), while Tripura had the highest crime rate against women (37 percent).