Dancing Her Way into the Record Books 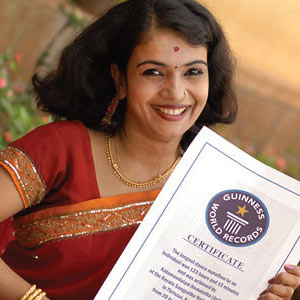 When it comes to dancing, her endurance remains unmatched—for now, at least. Kalamandalam Hemalatha, an exponent of Mohiniyattam, danced continuously for 123 hours and 15 minutes last year in Thrissur, Kerala, to earn a place in the Guinness Book of World Records.

Hemalatha’s previous attempt, also in 2010, lasted 64 hours. So she trained rigorously by running marathons and by dancing for 10 hours every day. But was this achievement a publicity stunt, given the Indian predilection for setting unusual world records?

Not in her mind. Hemalatha sees it as a way to bring more attention to an ancient Keralan art that has less mass appeal in the pop-influenced world of reality television shows. Mohiniyattam is considered one of India’s eight classical dance forms, the others being Bharatanatyam, Kathak, Kathakali, Kuchipudi, Manipuri, Odissi and Sattriya. A professional dancer and the mother of two, 37-year-old Hemalatha heads a dance academy in Thrissur.

A couple of questions spring to mind: (1) How many breaks did she take during her record-breaking performance last year? (2) What made her stop, eventually?

(1) Incredibly enough, Hemalatha took only a five-minute break every day. (2) And she didn’t stop after passing the previous record, as one would have expected. Rather, she just collapsed after dancing for over five days. Hemalatha was rushed to the hospital, but fortunately she made a quick recovery and was able to celebrate her very “Indian” accomplishment. Unsurprisingly, the record she broke had been held by another Indian. In 2008, after dancing continuously for 108 hours in the Kuchipudi style, Hyderabad-based Vattikotta Yadagiri Acharya set the previous world record.