Family is first for Indian-Americans 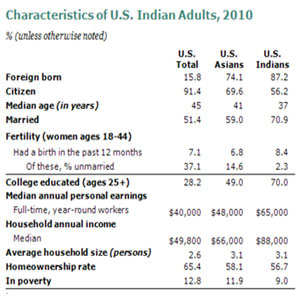 Only 8 percent of Indian-Americans think the strength of family ties is better in the U.S. (69 percent think it’s better in India). While 12 percent of Indians marry non-Asians, 86 percent opt for marriage within their ethnic group, and the remaining 2 percent hook up with other Asians. The percentage of children living with two married parents is highest for Indians among all groups (Indians: 92, Chinese: 83, Asian: 80, General: 63). Another finding: 69 percent of Indians (again, the highest) still have close family living in India.