A Fictional Journey Across India 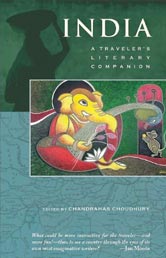 A compact, handsomely produced paperback called India: A Traveler’s Literary Companion is the latest title from California-based Whereabouts Press. It’s not a collection of travel literature, as one might think. What we have, instead, are fiction selections from Indian languages, and English, giving us glimpses of a country that seems tradition-bound even as it’s caught up in the throes of change. These contradictory impulses can perhaps be explained by the way older novelists (Bibhutibhushan Bandopadhyay, Fakir Mohan Senapati, Lalithambika Antharjanam) are mixed in with more contemporary writers (Anjum Hasan, Githa Hariharan, Nazir Mansuri).

Moreover, this dichotomy can be accounted for by the presence of urban-centric (Vikram Chandra) and rural-centric (Mamang Dai) authors who depict not just different regions—Mumbai and Arunachal Pradesh, respectively, in this case—but also divergent cultures.

For this anthology, Chandrahas Choudhury, a literary critic and the author of Arzee the Dwarf, has read widely and chosen wisely for the most part, though some languages have been shut out. That’s inevitable, perhaps, but it is still striking that half the stories are in English. And that’s progress, by the way. Another recent collection in this country (Passages: 24 Modern Indian Stories, Signet Classics) has only three contributors from Indian languages, and even among those, one (Manoj Das) writes in Oriya and English. To correct this imbalance, Choudhury gives more attention to writers in Indian languages.

Among the other writers he chose, we have Bihar’s Phanishwar Nath Renu, who uses a light touch to show how a Petromax lantern called ‘panchlight’ diminishes the harsh reality of caste in rural India. Salman Rushdie takes us to Kashmir, where fact meets fiction for an exuberant tale in his trademark, magic-realist style.

Qurratulain Hyder’s elegiac story has an autobiographical flavor in its portrayal of a time when Delhi and Lahore seemed to belong to one nation. Jayant Kaikini narrates a road story—or rather a train story—in which a teenager from rural Karnataka learns the meaning of home when he befriends a more worldly Bengali boy as he travels to the big city for the first time. The reader, too, is a passenger on this journey across India, but what can fiction do better than nonfiction, which attracts most armchair travelers?

Choudhury has an answer in his chat with the publisher. “I think that where fiction scores over nonfiction is that it offers, without the self-consciousness of a travel writer, the felt experience of a culture from within. In moving between character, society, and landscape, all the while telling a story, fiction offers an intensity and depth of representation that most reportage cannot achieve. Fiction, precisely because it does not explicitly set out to ‘inform,’ gives us a kind of knowledge that other forms of prose writing cannot.”