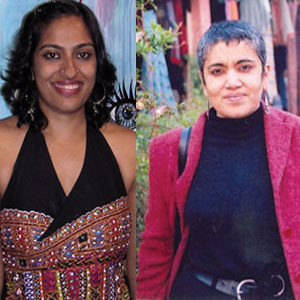 Chitra Ganesh and Mrinalini Sinha are among the 181 Guggenheim Fellows picked this year from a pool of 3000 applicants. Each fellowship, with no strings attached, is worth $500,000. Ganesh, an artist who explores neglected narratives of canonical works, creates paintings and installations that challenge the beliefs of viewers on themes like femininity, sexuality and power. Hindu, Buddhist and Greek iconography have influenced her, along with European painting, Japanese woodblock prints, anime, Bollywood posters, and literary forms such as science fiction, mythology and folk tales. Raised in New York by Indian immigrants, Ganesh, who studied literature and art at Brown and Columbia, has had her work exhibited in galleries and museums in cities that include New York, Mumbai, Vienna and Shanghai. One can see her permanent installations at a couple of universities (Rutgers and Brown), MoMA in


New York, and a Helsinki museum.

Mrinalini Sinha is a historian and professor of English at the University of Michigan, Ann Arbor. She specializes in colonial history, with an emphasis on anti-colonialism, gender and transnationalism. In an updated edition of Mother India, Katherine Mayo’s highly critical, sensational book from 1927 about India and the Indian national movement, Sinha provides commentary on the excerpts she picked. Sinha’s Guggenheim project, according to the foundation, will explore the contingency of the development of the nation-state form in India. ALSO: Innovative educator Salman Khan, Manhattan prosecutor Preet Bharara, and HIV activist Anjali Gopalan are among Time magazine’s 100 most influential people this year.