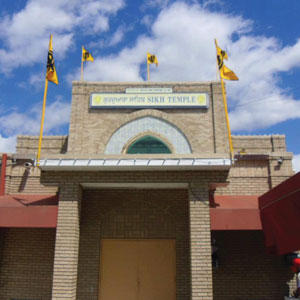 What’s striking about the Stockton Gurdwara, America’s oldest Sikh temple, is that the original building still stands. But these days, understandably, that’s not where the worshippers gather, as they used to in the early decades of the 20th century. It now houses the gurdwara’s library. Small numbers of Sikhs began to settle in California in the closing years of the 19th century, though there was no formal Indian organization until 1910. The following year, a Sikh association was formed near Stockton, California, and soon the fund-raising began for what became America’s first gurdwara. After buying a parcel of land on South Grant Street in 1912, these early settlers installed the Guru Granth Sahib and hoisted a Sikh flag, turning the existing frame house into a gurdwara. What was the cost? $3,000, which wasn’t inconsiderable back then. The two-story wooden gurdwara was dedicated in 1915, making it America’s first permanent Indian religious building—and in 1929, a larger building was added to the gurdwara complex. During the struggle for India’s independence, it attracted notable visitors like Sarojini Naidu. The gurdwara’s formal centennial celebrations will be held in October.

Remarkably, a Canadian gurdwara is even older. Located in Abbotsford, British Columbia, the Gur Sikh Temple completed a century last year, making it the longest existing gurdwara in North America. Its formal opening took place in 1912. Back then, the Sikh population there wasn’t much higher than it was in California, and throughout the Pacific Northwest these migrants worked in farming, lumber mills, and construction. Because of the restrictive policies that followed, immigration from Asia dropped sharply, and the Sikhs in America suffered setbacks. Hence, the importance of these gurdwaras in their lives cannot be underestimated.