Home > Magazine > Desi World > How do you spell Humuhumunukunukuapuaa?

How do you spell Humuhumunukunukuapuaa? 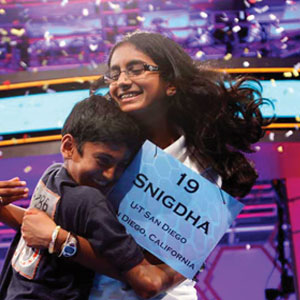 No, this wasn’t one of the words the finalists had to spell at the 2012 National Spelling Bee championship in Washington, D.C. These expert spellers would have loved its inclusion, though: they’d picked it as one of their favorite words. It’s the name of a Hawaiian triggerfish. But “guetapens” (ambush) was included—and Snigdha Nandipati, a 14-year-old from San Deigo, spelled it correctly to win the engraved trophy and other prizes totaling about $40,000. The runner-up, also 14 years old, was Stuti Mishra of West Melbourne, Florida, while 12-year-old Arvind Mahankali, a New Yorker, took third place. 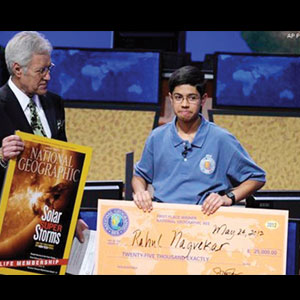 This clean sweep came in the wake of the 2012 National Geographic Bee, which also gave us Indian-American winners in the top three spots. Rahul Nagvekar, a 14-year-old from Texas, faced this question in the final round: Which Bavarian city located on the Danube River was a legislative seat of the Holy Roman Empire from 1663 to 1806? This might sound obscure, but not to Rahul. His answer (“Regensburg”) won him the top prize, which includes a $25,000 college scholarship and a lifetime membership to the National Geographic Society, along with a trip to the Galapagos Islands. Vansh Jain of Wisconsin came in second, followed by Varun Mahadevan of California and Raghav Ranga of Arizona, respectively. Vansh and Varun are 13 years old, while Raghav is a year older. There were altogether seven Indian-Americans among the top 10 finalists.