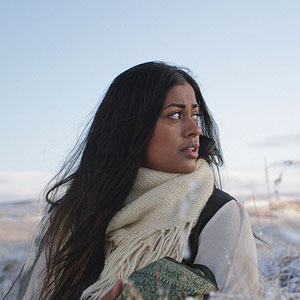 Love, Outlaw sounds like a masala movie. Indeed, it does have an Indian connection— but this Bollywood-style film is an Icelandic production. Though a Nordic folktale is the basis for the story, featuring lovers Halla and Eyvindur, the Indian film tradition acts as an inspiration, too.

Does this mean there will be singing and dancing amidst spectacular lava fields, snow-covered mountains, and rivers carved out by glaciers? Naturally.

Halla, a young widow, leaves behind her life of affluence and comfort to start anew with her lover, Eyvindur, a farm worker who may be a dreaded outlaw. The authorities, unsurprisingly, come after the lovers when they take off for the remote highlands. Think of it as an Icelandic Western with an Indian twist. This project gained momentum at the Indian Film Festival in Reykjavik last year, and is expected to be completed later in 2013.

Iceland has already attracted Indian directors: it was the setting for two films—Tamil and Telugu—in 2009. Now comes another Telugu film, Nayak, which has scenes set in not only Iceland but also Slovenia, Norway, and Greece. The title is not new—Satyajit Ray and S. Shankar made two earlier Nayaks—although the latest Nayak is supposedly the first Indian film to have scenes set in Slovenia. The towns of Piran and Bled, along with the Postojna caves, appear in this yet-to-be released film directed by V. V. Vinayak. The mayor of Ljubljana, the capital, gave the green signal.

Which means we can add this beautiful Alpine nation to Europe’s growing list of destinations for Indian filmmakers.