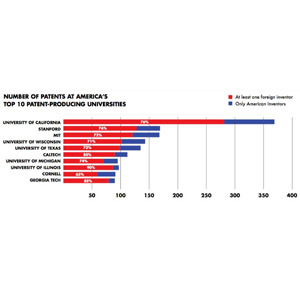 Gurtej Sandhu holds a whopping 952 patents, as per one source, making him one of the most prolific inventors in the States. And Ravi Arimilli holds 387, making him IBM’s top patent holder. A decade ago, Arimilli earned 78 patents in one year! Sandhu’s work is in the field of memory and imaging chips, among others, while Arimilli made contributions in computer architecture, symmetric multiprocessing, and semiconductor memory. Both came to the U.S. from India.

At the top 10 patent-producing American universities in 2011, Indians played a big role as inventors, according to a recent study (“Patent Pending: How Immigrants are Reinventing the American Economy”). More than one in seven patents had an inventor from India, although Chinese researchers played an even larger role. Overall, about 76 percent of the 1500 patents issued to these universities last year had at least one foreign-born inventor. Foreigners played an even larger role in cutting-edge fields like semiconductor device manufacturing, IT, pharmaceutical drugs, pulse or digital communications, and optics. Nevertheless, over half these students or researchers faced U.S. visa challenges. “Many foreign-born graduates face immigration options after graduation that are bewilderingly complex and discouraging,” the study notes.

Last month, in a letter to Obama and Congress, 165 leaders of American universities asked them to approve more green cards for advanced foreign graduates of STEM (Science, Technology, Engineering, Math) by pointing out that they earn 52 percent of doctorates in STEM and account for 45 percent of the graduate students in those fields.