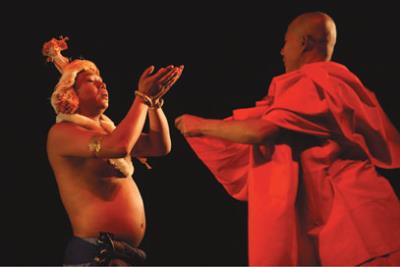 Also in April, a long way from France, another Festival of India opened in Beijing. Though scheduled to end in October 2010, it’s even more ambitious than Namaste France, which is expected to cost 30 million rupees. The Festival of India’s price tag in China, on the other hand, may exceed 45 million rupees. Events in various cities include dance recitals by Odissi, Kuchipudi, Baul and Bollywood troupes. The rock band Indian Ocean will perform, along with other contemporary music and theater groups. The closing ceremony, to be held in Chengdu, will feature a jugalbandi concert by Shiv Kumar Sharma on santoor and Hariprasad Chaurasia on flute, followed by a Bharatnatyam performance by Kalakshetra. There’s also an Indian film festival (Ticket to Bollywood), not to mention exhibits of Buddhist art and photography.

And at the 2010 Shanghai Expo, now in progress, there’s an Indian pavilion that highlights diverse aspects of Indian culture through a ‘Cities of Harmony’ theme. A dome incorporating facets of Buddhist and other Indian traditions is surrounded by a bazaar-like display of Indian paintings and handicrafts, among other products. A 360-degree holographic projection provides a narration of Indian urban life through the ages.