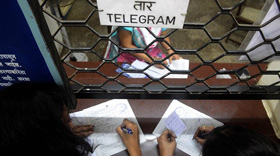 A businessman once made a trip to an Indian hill station, from where he wanted to send a telegram to his wife reading “Wish you were here.” Instead, in his haste, he wrote “Wish you were her.” He had to come up with a good explanation, no doubt! That message, these days, would go out in the form of a cellphone text message or an email. Indeed, in a sign of how dramatic the changes have been in recent years, India’s domestic telegraph system—which had existed since the days of the Raj—shut down last month. It was one of the world’s last big-scale telegraph operations. Like Western Union, which closed its unprofitable U.S. operation in 2006, BSNL was losing ground in India, with losses exceeding $23 million annually. While 20 million Indian telegrams were sent in 1947, that number dropped to 40,000 by 2012. In its heyday, in the mid-1980s, over 60 million messages were transmitted via 45,000 telegraph offices spread across India.

Just a decade before Samuel Morse—co-inventor of the telegraphic code—sent the first wire, an Englishman named William O’ Shaughnessy did the first telegraph demonstration in India. That was in 1833, exactly 180 years before the telegraphic STOP within India became permanent.

India retains its international wire service, but gone are the days when ordinary Indians could send a taar in English by just saying 18 or 16, among other numbers. These telegram codes stood for the following greetings: (18) Kind Remembrances and all Good Wishes for the Independence Day. (16) May Heaven’s Choicest Blessings be showered on the young couple.