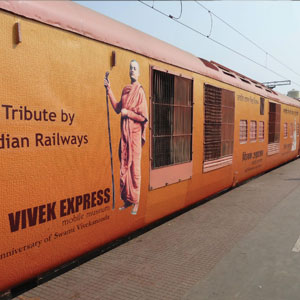 The Kerala Express, which takes over 42 hours to complete its journey, has the longest run among India’s daily trains. But on the weekly Vivek Express you’ll have to spend 40 more hours to travel from Dibrugarh in the northeast to Kanyakumari at the southern tip of the peninsula. No other Indian passenger train has a longer run. There are 52 stops on this route, which cuts through seven states and traverses almost 2700 miles. Though it’s a record for Indian Railways, there are seven non-Indian trains that travel longer distances. Introduced last year to commemorate the upcoming 150th birth anniversary of Swami Vivekananda, the Vivek Express is just one of four such trains—and there’s also a mobile museum that celebrates the famous monk’s life. The other three express trains travel between
(1) Santragachi in West Bengal and Mangalore in Karnataka,
(2) Dwarka in Gujarat and Tuticorin in Tamil Nadu, and

The Vivekanada train exhibit will end next year, following nationwide festivities. It was on September 11, 1893, that Swami Vivekananda, who was born in 1863, made his well-known appearance at the Parliament of World Religions in Chicago. This year marks the 110th anniversary of his death.

These Indian train exhibits are not new. Other mobile museums have commemorated the anniversaries of figures like Gandhi, and recently there was also a Science Express that was a joint venture with Germany. This 16-coach train traveled the length and breadth of India, showcasing advances in physics, biology, space research, math and chemistry.