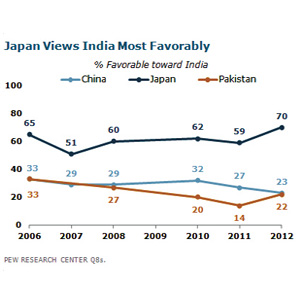 A striking 79 percent of Indians want to protect their traditional culture from globalization, with 52 percent saying that the traditional way is being lost, according to a recent Pew survey. And for 43 percent of Indians, consumerism and commercialism are the big threat to their culture.

Nevertheless, 61 percent of Indians firmly support a free market economy, though a vast majority—81 percent— also agree that the rich in India are getting richer and the poor becoming poorer. By a 25-percent margin, high-income Indians are more satisfied with their economic situation than are low-income Indians. And 61 percent say that, despite inequalities, there is no better alternative to a free-market economy. Although 53 percent believe in a libertarian approach, with no government interference, Indian pessimism stands out among the world’s major economies. While 45 percent say the government is mainly responsible for the economic woes, 92 percent think the government is primarily or secondarily to blame. But the public is not off the hook. Only 17 percent hold financial institutions responsible, but 64 percent blame the public for the economic woes. Unemployment is the biggest concern, with corruption, education, and pollution appearing further down the list. Among the many problems bedeviling the nation, traffic and safety of medicine seem to be the least worrisome.

More urban Indians (58 percent) than rural Indians (38 percent) have a favorable view of Americans. Indians don’t think too highly of China or Pakistan; the two nations return the favor. China and India, in fact, show the same favorability rating (23 percent) when viewing each other. The Japanese, on the other hand, have a highly favorable view (70 percent) of India.