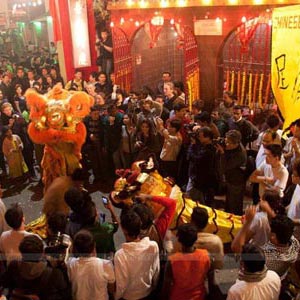 Speaking of the Indian-Chinese community, its size—never very large in India—has shrunk considerably over time. But there is still a Chinatown in Tangra, Kolkata. The Hakka Chinese who had settled there worked mostly in the tanneries that once thrived in the area. Their descendants have scattered, but the Chinese New Year continues to be celebrated with gusto in Tangra. And the Hakka legacy lives on in other ways. Its most famous contribution is the distinctive Indian-Chinese cuisine, which has a large and devoted following even outside India. What can sum up this gastronomic fusion better than Gobi Manchurian? As any aficionado would note, this spicy dish has nothing to do with the Gobi Desert. But it has a lot to do with cauliflower. Even hole-in-the-wall Indian restaurants often serve Hakka noodles and Chilli chicken. In an earlier period, the Hakka Chinese also became known for the beauty parlors they owned and operated in India.

In a shameful chapter during the Indo-China war of the early ’60s, the Hakka Chinese in India came under suspicion and suffered persecution. A short film called The Legend of Fat Mama celebrates the life of Tangra’s residents. The Kali Chinese Temple is a landmark in that area. Kwai-Yun Li, now based in Canada, writes about India’s Hakka Chinese in her fictional works, which include The Last Dragon Dance, The Palm Leaf Fan and A Kiss Beside the Monkey Bars. She grew up in Kolkata’s Chhatawala Gali, where many of her stories are set.

Meiyang Chang, a Hakka Chinese dentist, saw his life change when he became an Indian Idol 3 finalist. He made his film debut in Badmash Company. According to the website Dhapa, Tina ki Chaabi is the first Hindi film to have scenes set in Tangra. One way the Hakka Chinese remain connected to India is through Bollywood movies. After attending a diaspora conference in Toronto last year, Richard wrote on the website: “I really luved [sic] the person singing Dil Deke Dekho. Thanks. Made me feel proud to be Hakka.”